Get early access to new products, datasheets,
and free samples.


OCTOBER 2, 2020 - The trend towards LED lighting in vehicles is well accepted for its higher energy efficiency and reliability, but its versatility also offers an excellent way to enhance the driving experience. From advanced steerable headlight beams to sophisticated in-cabin mood lighting, the ability to combine individual LED control, color, and brightness opens up a plethora of opportunities to add style and appeal to a vehicle.


Monolithic Power Systems (MPS) has launched the MPQ3326-AEC1 to meet the needs for several of these vehicle lighting trends, including daytime running lights, infotainment displays, dynamic direction indicators, information cluster backlighting, and side, tail, and puddle lights. This comprehensive set of features includes: 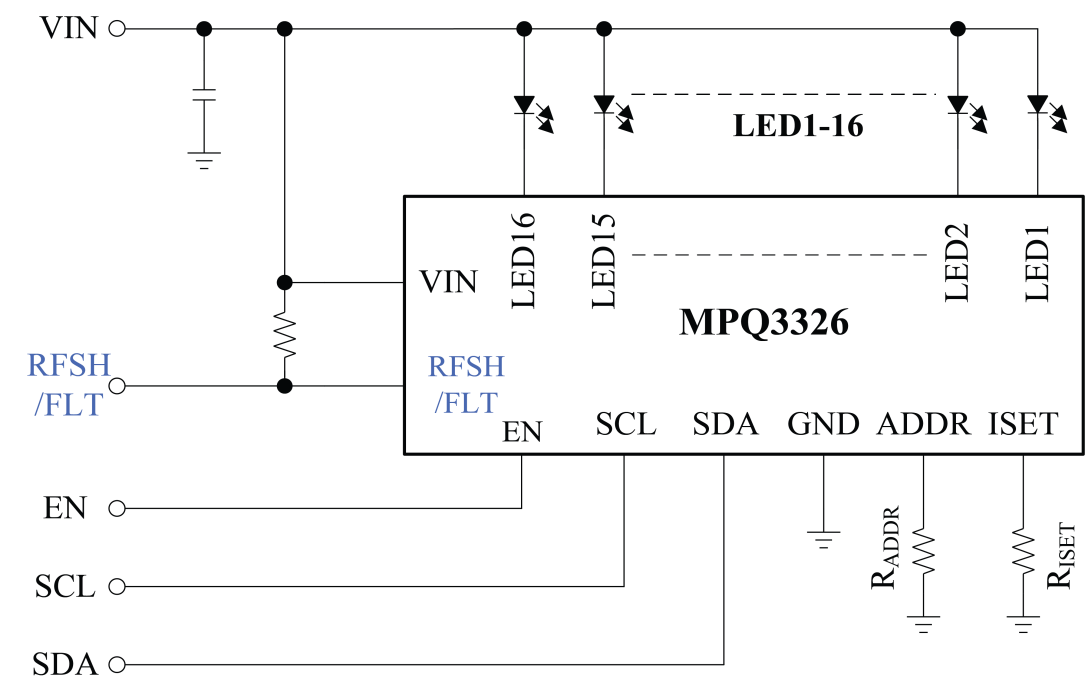 With 16, 50mA channels that can be combined in parallel for higher currents, as well as the capability to independently dim each channel, the MPQ3326-AEC1 offers great flexibility to support different lighting effects and LED power levels. In addition, the option to cascade up to 10 devices on the I2C bus ensures scalability.

The following examples illustrate the flexibility of the MPQ3326-AEC1.

A popular trend in new vehicle designs is to add dynamic movement or animation to the direction (turn) signals. This typically involves illuminating each LED segment in a sequence that indicates left or right movement (see Figure 2). For the direction indication mode, each segment may need about 200mA of drive current. For a turn signal with five LED unique segments (each segment consisting of three LEDs in series). This design is achievable with two MPQ3326-AEC1 devices, combining four channels in parallel for each of the five segments. 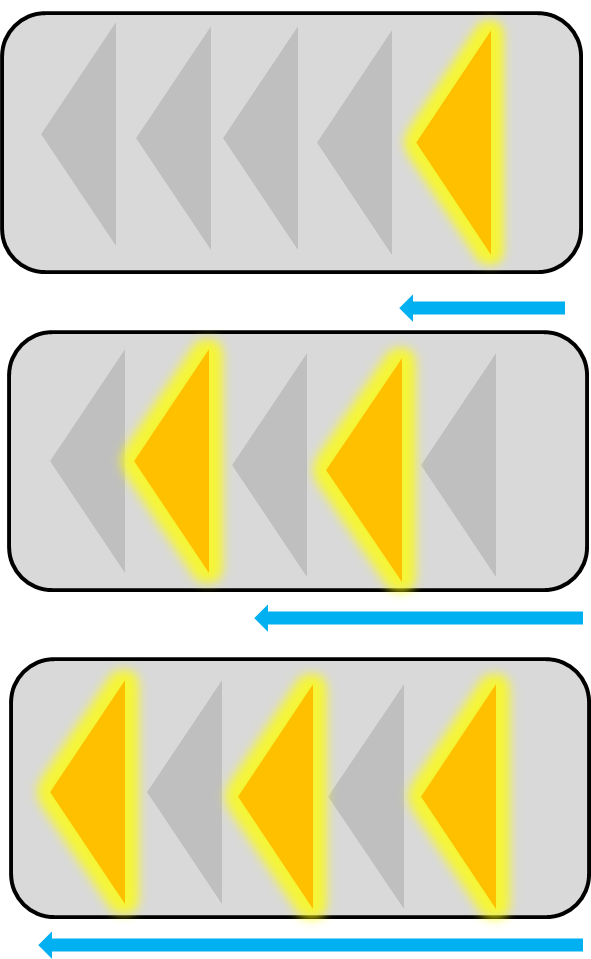 The I2C bus control allows the system microcontroller to enable and sequence the lighting of each segment for the relevant operating mode, such as scrolling left or right for direction mode, or flashing all segments on and off for hazard mode. Figure 3 shows the circuit. 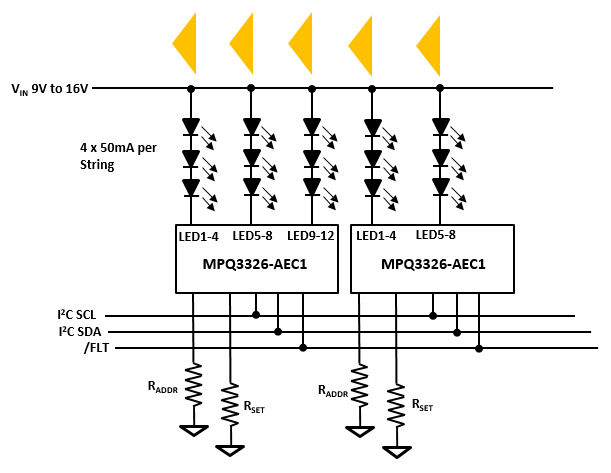 Daytime running lights (DRL) have become a standard, legally required feature on the front of all European vehicles. Because these lights are often situated in the same light cluster as the turn signal, it is beneficial if the DRL can be dimmed when the signal is in operation so as not to mask the visibility of the turn signal to other road users. In addition, a soft turn-on and turn-off effect can be added to give the feeling that the vehicle is “waking up” when it is started, especially at night. When combined with similar effects to the cabin interior and puddle lighting, these soft start-up modes help to add a high-end quality feel to the vehicle.

The dimming features of the MPQ3326-AEC1 support these effects, and the ability to combine 12-bit PWM dimming on each channel in conjunction with 6-bit analog dimming offers very fine granularity of light level control. Given that a typical DRL might use 250mA per LED string, one MPQ3326-AEC1 could drive three strings of LEDs for each DRL unit at 250mA per string by combining five channels in parallel for each string.

For many vehicle lighting applications it is necessary to maintain stable, flicker-free LED lighting performance during “cold crank” engine start scenarios where the nominal 12V battery voltage may temporarily dip as low as 6V. This has become even more common with the popularity of automatic engine stop/start features for reduced environmental emissions, and of hybrid electric/fuel based vehicles, has grown.

Depending on the required LED string voltage that needs to be maintained, this requires either a buck (step-down) or boost (step-up) DC/DC converter to be placed before the MPQ3326-AEC1 LED constant-current driver. MPS offers a range of options for the boost or buck.

For the boost case to support LED strings of three or more series LEDs (assumed typical forward voltage 3V), the MPQ3425-AEC1 is a non-synchronous boost capable of operation down to 3.1V and up to 55V at its input, and has a 5A rated switch current limit.

For the buck case stepping down from the nominal 12V battery voltage to drive one or two series LEDs, the MPQ4420-AEC1 DC/DC converter is a good option. Synchronous operation ensures high efficiency without the losses that would be incurred by a simple linear regulator. In addition, the MPQ4420-AEC1 has outstanding EMI performance and light-load quiescent current (see Figure 4). 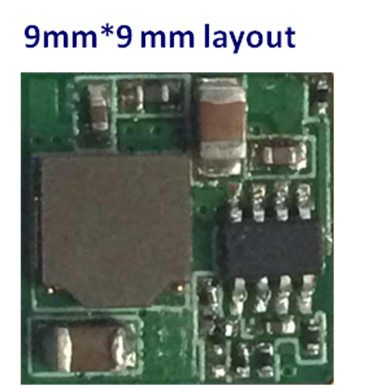 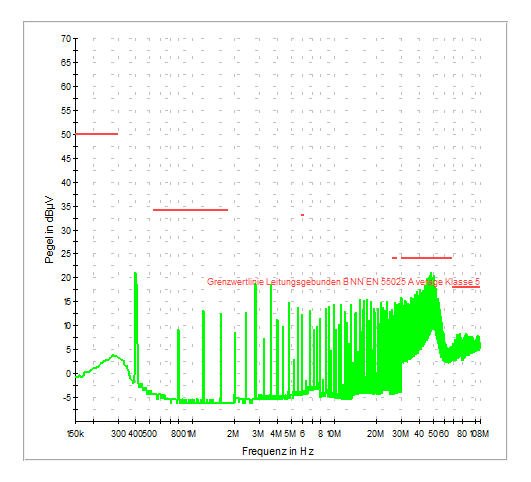 A demo board based on the MPQ4420 and two MPQ3326 devices is capable of driving up to 32 LEDs (see Figure 5). This design also includes an ultra-low quiescent current (3µA) LDO-MPQ2013 to provide power to the lighting system’s microcontroller during standby. 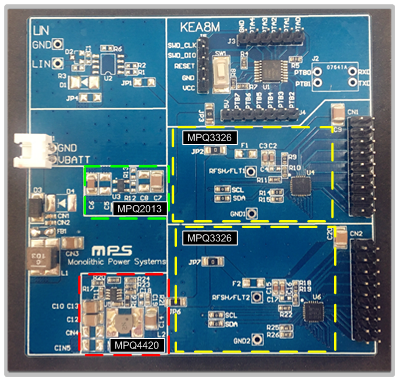 Did you find this interesting? Get valuable resources straight to your inbox - sent out once per month!

Questions answered by MPS engineers in 24h
Usb C source and sink power with MPQ4228-C-AEC1
Hi, I am looking for advice on this chip. The mcu circuit needs to supply power to a cell phone when it has external power and be powered by the phone...
AUTOMOTIVE SOLUTIONS