In motor drive systems, a gate driver or “pre-driver” IC is often used along with N-channel power MOSFETs to provide the high current needed to drive motors. There are a number of design considerations to be made when selecting the driver IC, MOSFETs, and in some cases associated passive components. Often this process is poorly understood, and implementations are less than optimal.

This article will discuss simple methods to select components for a pre-driver/power MOSFET circuit, and the resulting performance of the system.

Start with the Motor

To design a DC motor drive — whether it is for a brush motor or a three-phase brushless motor — the motor characteristics will determine the design details of the drive. The two main factors that help define the drive design are the operating voltage and current requirements of the motor.

However, these parameters are not as simple as they might first appear. Motors are usually given voltage and current ratings, but in actual operation, the operating values may vary from these ratings. Motor speed is determined by the voltage applied. The current needed by the motor depends on the torque applied to the motor. Therefore, the drive may or may not need to be designed to the full specifications of the motor.

The speed constant and torque constant — usually given in a motor’s datasheet — can be used to estimate the voltage and current needed in a particular application. The drive must be powered from a voltage at least as high as that required to get the desired speed from the motor, but the supply voltage is often determined by the voltage available to the system. The maximum current requirement is usually set by the torque needed to start up the motor with a mechanical load.

Be sure to choose power MOSFETs that are rated for at least the power supply voltage and the maximum current needed by the motor. Some margin is necessary as well.

Generally, the drain-to-source voltage rating (VDS) of the MOSFETs should be at least 20% higher than the supply voltage. In some cases — especially in systems with large currents, large torque steps, and poorly controlled power supplies — this required margin may be as much as twice the supply voltage.

The current rating of the MOSFET must of course be high enough to provide the peak current needed by the motor, but usually thermal considerations dominate. The MOSFETs dissipate power and generate heat in the drain-source resistance: RDS(ON). Thermal constraints, including the ambient temperature and any heatsinking available for the MOSFETs, set limits on how much power can be dissipated. This maximum allowable power dissipation drives the selection of the MOSFETs based on the RDS(ON) value.

Once the necessary voltage rating and RDS(ON) have been determined, it is important to consider the total gate charge (QG). The gate charge is a measure of how much charge is needed to turn the MOSFET on and off. A MOSFET with a lower QG is easier to drive. It can be switched faster, with a lower gate drive current, than one with a high QG.

The gate of a power MOSFET can be viewed as a nonlinear capacitance between the gate and source terminals. Even though the gate does not conduct DC current, current is needed to charge and discharge the gate capacitance to turn the MOSFET on and off. The amount of current provided to the gate determines how much time it takes to fully turn on the MOSFET. Similarly, when current is pulled out of the gate, that amount of current sets the MOSFET turn-off time.

To understand what is needed to drive the gate, one needs to know how fast the MOSFET must be switched. There is a design tradeoff made between low switching losses (which require fast rise and fall times) and low EMI (which requires slow rise and fall times). In addition, the PWM frequency and minimum and maximum required duty cycles put a time restriction on how fast switching needs to be. For example, with a 20kHz PWM frequency, a 1% duty cycle requires generating a pulse that is 500ns long. This requires a rise and fall time of a few hundred nanoseconds or less.

After determining what rise/fall time is required, calculate the necessary gate drive current. This can be estimated as QG / t, where QG is the total gate charge and t is the desired rise/fall time.

Note that this is the amount of current that would need to be driven for the entire rise/fall time — in reality, the gate drive current usually varies somewhat over this time, as most gate drivers are not constant-current drivers.

If delivering a constant current into the gate, the voltage at the gate is not a linear slope — it reaches a plateau during the time that the MOSFET is switching (see Figure 1). This is called the “Miller plateau,” and is caused by the gate-drain capacitance. When the drain is transitioning, this capacitance takes current to charge, so the charging of the gate-source capacitance slows.

The lower the current provided to charge the gate, the longer the time that it takes the transition to complete. 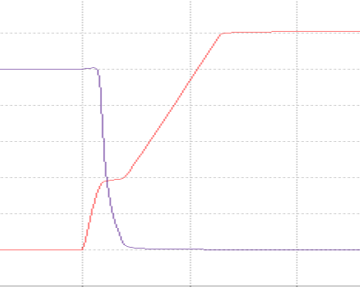 Figure 2 shows the waveforms if a 12V constant voltage gate drive is used with 12Ω series resistance. The plateau is still there and it takes longer for the gate to reach 12V, but the switching time at the drain is nearly the same.

Once you know the minimum gate drive current that will be required, select a gate driver (pre-driver) IC that can support this current. There is a wide variety of these parts available, with different numbers of channels, gate drive current capabilities, and supply voltage ranges. Additional integrated features, such as current-sense amplifiers and protection circuits, are also available in some parts.

Pre-driver ICs are available from many semiconductor suppliers that make products for power management, including MPS. There are a wide variety of single-channel and three-channel pre-driver ICs designed for DC motor drives, including the three-channel 60V and 100V families, as well as single-phase, 100V devices.

Some pre-driver ICs generate the required gate drive voltages internally from the main motor power supply, using linear regulators, charge pumps, and/or bootstrap capacitors. Others require a separate gate drive power supply. To operate at 100% duty cycle (with output high for an extended period of time), choose a pre-driver with an internal charge pump to keep the high-side gate turned on for an extended period. Pre-drivers that rely only on a bootstrap for the high side can only keep the high-side MOSFET on for a limited time, as leakages drain the bootstrap capacitor after some time.

The gate driver must be able to provide at least the amount of current needed to achieve the rise and fall times needed described above, but a driver with more current capability can also be used.

Some driver ICs provide a way to adjust rise and fall times (also called “slew rate adjust”) by varying the amount of gate drive inside the part. When using parts without a built-in slew rate adjustment, the user can insert resistance between the gate driver output and the MOSFET gate. This limits the gate current, and slows the rise and fall times.

Get independent rise and fall times by adding a diode (see Figure 3). 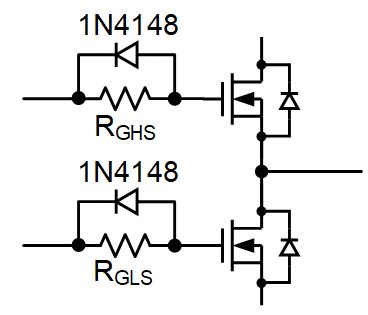 Figure 3: Diagram for Adding a Diode 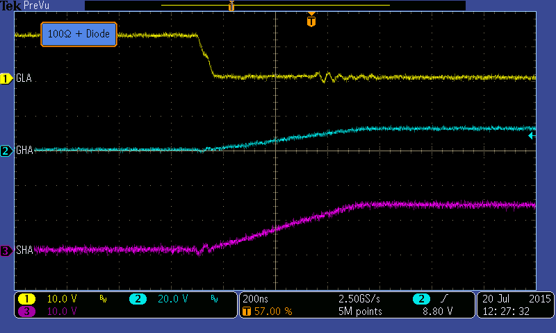 This is often done to ensure that one FET in a half-bridge arrangement turns off fully before the opposing FET turns on, which guarantees dead time. Figure 4 shows that the low-side gate (GLA) drops very quickly as it is discharged through the diode, but the high-side gate (GHA) charges slowly due to the resistor. The result is a slow rise time at the output (SHA), controlled by the high-side MOSFET turn-on.

Since the gate has a nonlinear capacitance and the driver is usually not a true voltage or current source (typically it is a FET operating in a linear region), it can be difficult to accurately calculate the necessary resistance to achieve a specific rise or fall time. It is usually best to derive the right values experimentally, or through simulation. Start with the assumption that the gate drive current will equal the gate drive voltage (often 12V) divided by the series resistance, and work from there. Be sure to also include the output resistance of the gate driver when making this calculation.

This article provided some practical information to select the best components for use in a motor drive with a pre-driver IC and power MOSFETs. Hopefully it will help you in selecting the right IC and associated components in your next motor drive design.