Motor driver ICs deliver large amounts of current and dissipate a significant amount of power.  Generally, this power is dissipated into copper areas on the printed circuit board (PCB). To ensure adequate cooling, special PCB design techniques are required. Part 1 of this article will provide some general recommendations for designing PC boards that use motor driver ICs.

Thick copper, like 2-ounce foil (68 microns thick), conducts heat better than thinner copper.  Unfortunately, using thick copper is expensive, and it is also difficult to achieve fine geometries. Generally, the use of 1-ounce (34 microns) copper is commonplace. For external layers, this is often ½-ounce copper plated up to 1-ounce thickness.

Solid copper planes used on inner layers of multi-layer boards work well to spread heat. However, since these planes are normally placed in the center of the board stack-up, the heat can be trapped inside the board. Adding copper areas on the outer layers of the PCB and placing many vias to connect, or “stitch,” these areas to the inner planes helps transfer heat out of the planes.

On 2-layer PCBs, spreading heat can be more difficult due to the presence of traces and components.  Providing as much solid copper as possible with good thermal connections to the motor driver IC is a necessity. Putting copper pours on both outer layers and stitching them together with many vias helps spread the heat across areas cut by traces and components.

Since the current in and out of a motor driver IC is large (exceeding 10A in some cases), carefully consider the width of PCB traces in and out of the device. The wider a trace is, the lower resistance it has. Traces must be sized so that there is not excessive power dissipated in the trace resistance, which causes the trace to heat up. Too small of a trace can actually act like a fuse and burn open!

Designers often use the IPC-2221 standard to determine appropriate trace widths. This specification has charts that show the copper cross-sectional area for various current levels and allowable temperature rise, which can be converted to a trace width at a given copper layer thickness. For example, a trace carrying 10A of current in a 1-ounce copper layer needs to be just over 7mm wide to achieve a temperature rise of 10°C. For a 1A current, the width only needs to be 0.3mm.

Given this, it seems impossible to run 10A of current through a tiny IC pad.

It is important to understand that the trace width recommendations in IPC-2221 apply to a long PCB trace of constant width. It is possible to pass much larger currents through a short section of PCB trace with no ill effects if they are connected to a larger trace or copper area. This is because the resistance of the short, narrow PCB trace is small, and any heat generated there will be drawn into the wider copper areas, which act as a heat sink. As an example, refer to Figure 1. Even though the pads for this device are only 0.4mm wide, they must carry up to 3A of continuous current. The trace is widened into as large a width as practical as close to the device as possible. 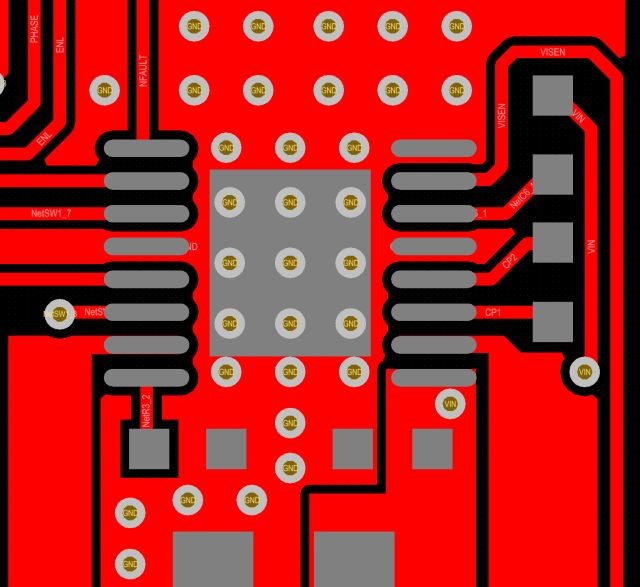 Any heat that is generated in the narrow portion of the trace is conducted to the wider copper areas so that the temperature rise in the narrow trace is negligible.

Thermal Vias – As Many as Possible!

Vias have thermal resistance, which means that there is some drop in temperature across them as heat flows through, measured in degrees Celsius per watt of power. To minimize this resistance and make the vias more effective at transmitting heat, the vias should be large with as much copper area inside the hole as possible (see Figure 2).

Although using large vias in open areas of the PCB is possible, vias are often placed within a pad area to move heat from the IC package directly. In this case, large vias are not possible, because a large plated hole would cause “solder wicking,” where the solder intended to connect the IC to the PCB flows down into the via, causing a poor solder joint.

There are several ways to reduce solder wicking. One is to use very small via holes so that the volume of solder wicked into the holes is small. However, small vias have more thermal resistance, so more of them are needed to achieve the same thermal performance.

Unfortunately, this can also cause a different problem: flux entrapment. With a plugged via, flux (which is a component of solder paste) can get trapped inside the via. Some flux formulations can be corrosive and result in reliability issues over time if they are not removed. Luckily, most modern no-clean flux processes are non-corrosive and do not cause problems.

Note that thermal vias should never have thermal reliefs. They must be connected to the copper areas directly (see Figure 3).

It is recommended that the PCB designer check with the SMT process engineers at the PCB assembler to choose the best via size and construction for that assembler’s process, especially when thermal vias are placed within pad areas.

TSSOP and QFN packages have a large exposed pad underneath the part. This pad is connected to the back side of the die and is used to remove heat from the device. It is imperative that this pad be well soldered to the PCB to dissipate power.

The opening in the stencil that is used to deposit solder paste for this pad is not always specified on the IC datasheet. Often, SMT process engineers have their own rules about how much solder should be deposited and what sort of pattern should be used on the stencil.

If a single opening similar in size to the pad is used, a large amount of solder paste is deposited. This can cause the device to be lifted up due to the surface tension of the solder when it melts. Another concern is solder voiding (cavities or gaps inside areas of solder). Solder voiding occurs when the volatile component of flux vaporizes, or boils, during the solder reflow process. This can cause solder to be pushed out of the joint.

To address these issues, for pads that are more than about ~2mm2, the paste is normally deposited in several small square or circular areas (see Figure 4). Dividing the paste into smaller areas allows the volatile flux components to more easily escape the paste without displacing the solder. 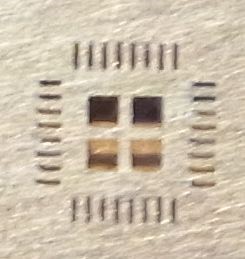 Again, it is recommended that the PCB designer consult with SMT process engineers to design the correct stencil openings for these pads. There are also a number of papers available online that can help.

Component placement guidelines for motor driver ICs are similar to other types of power ICs. Bypass capacitors should be placed as close to the device power pins as possible with bulk capacitors located nearby. Many motor driver ICs use bootstrap and/or charge pump capacitors, which should also be placed near the IC.

Refer to Figure 5 for an example of good component placement. Figure 5 shows an MP6600 stepper motor driver on a 2-layer PCB. Most signals are routed on the top layer directly. Power is routed from the bulk caps to the bypass and charge pump caps on the bottom layer, using multiple vias at the points where it changes layers. 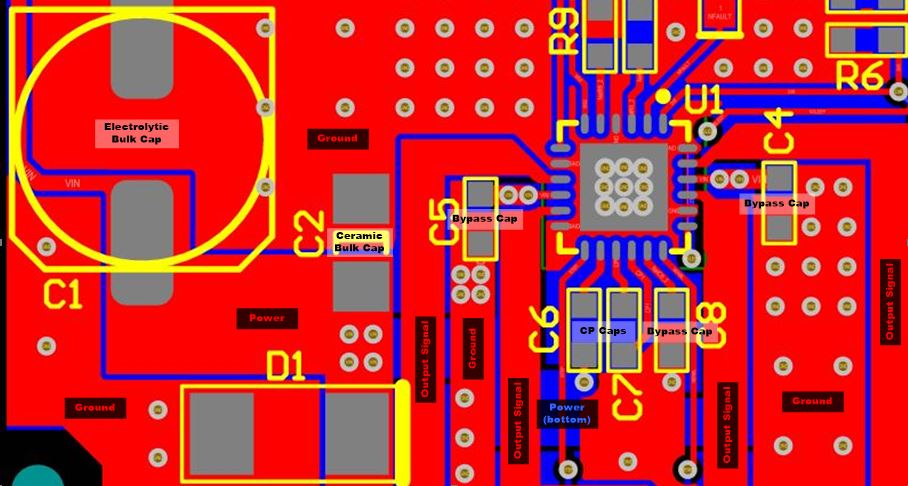 In part two of this article, we’ll look at some specific motor driver IC packages and how to implement PCB layouts using them.