To create the acoustic wave, a piezoelectric transducer (PZT) is used. The PZT physically expands and contracts when a voltage is applied to it, thereby converting electrical energy into acoustic energy. High-voltage pulses are used to excite the PZT. A pulse generator, sometimes referred to as the transmitter, with amplitudes of up to ±90V and current capability of ±2.0A are used. The same PZT is used to convert acoustic echoes back into electrical signals, which are referred to as the receive signals. The received signals are processed and analyzed to construct an ultrasound image of the transmitted path.

To better understand the principle of operation, consider a single-channel PZT (see Figure 1). During the transmit cycle, a single 5MHz cycle of ±90V is generated from the transmitter and applied across the PZT. The PZT creates a 5MHz acoustic wave that travels into the body, and the receiver starts listening for echoes. Acoustic waves travel on the average of 1.54mm/μs within the human body. To create an image of an object that is 10mm away from the PZT, a time duration of 10mm / (1.54mm/μs) = 6.49μs is required for the acoustic transmit wave to reach the object. Another 6.49μs of time is needed for the acoustic echo to reach the PZT from the object. The signal received at 12.98μs corresponds to an object 10mm away from the PZT. The time duration for the received cycle is therefore longer when imaging objects further away from the PZT. Once all echoes are received, one line of image can be constructed.

The receiver is a high-performance, low-noise, low-voltage device that can be easily damaged if the high-voltage pulses from the transmitter are applied to its input. Figure 1 shows a T/R SW block which denotes a transmit/receive switch used to block the high-voltage transmit pulse but allows the low-voltage receive signal to pass into the receiver’s input. The receive voltage is typically less than ±500mV.

To create a two-dimensional image, an array of PZTs is needed. An ultrasound probe is used to house the array of PZTs. There are many different types of ultrasound probes, such as abdominal, cardiac, and pediatric probes, among others, and are all specifically designed for various applications. The number of PZTs can vary depending on the probe type ranging from 128 PZTs to 512 PZTs. An array of 192 PZTs will be used as an example for this article.

Use of High-Voltage Analog Switches 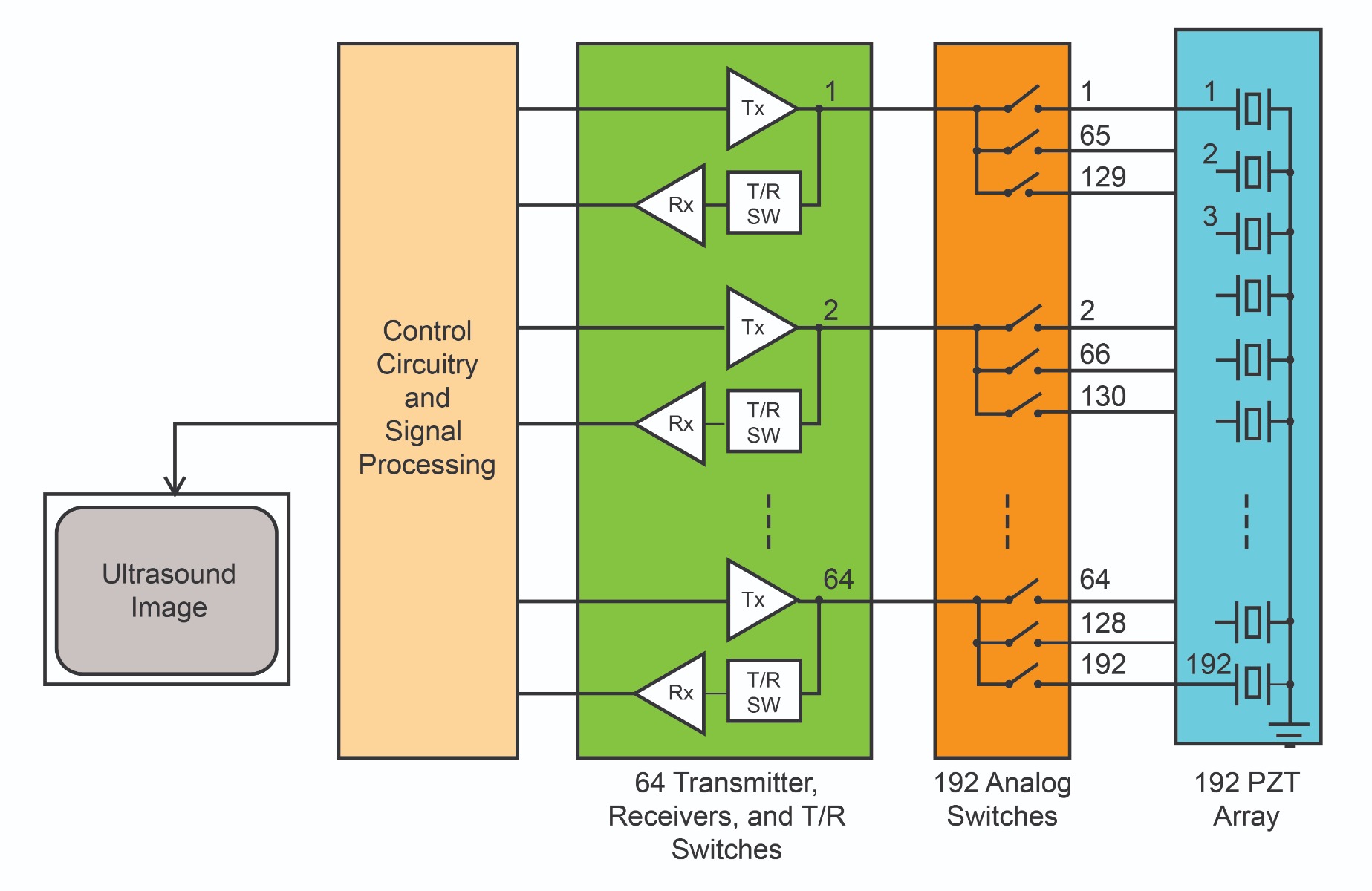 The probe head is generally severely limited spatially and thermally. The housing is waterproof, as it must be able to withstand being submersed in alcohol for sterilization after use, making it difficult to remove any heat being generated inside the probe head. By eliminating the high-voltage supplies, the power dissipation is reduced, and safety concerns of high-voltage DC lines on the coaxial cables are eliminated.