Understanding the MagAlpha Digital Filter: Benefits of the MA732 & MA330

This article, second in the series on the MPS MagAlpha magnetic rotary angle sensor family, looks at how the unique SpinaxisTM sensing technology uses digital filtering to achieve the final output resolution, and introduces the MA732 and MA300 versions with programmable filter settings. After sampling the angle via an array of front end Hall elements, the sensor accumulates samples into a modified Kalman-type digital filter which removes noise and increase the final output resolution.

This article will discuss:

The MagAlpha output resolution is defined as the 3-sigma (σ) value over 1,000 readings. For example, the MA702 sensor has a typical output resolution of 11.5 bits with a 45mT field; in other words, 211.5 = 2896 unique repeatable angle positions per rotation. The sensor angle readings follow a standard Gaussian distribution, and for the range of ±3-sigma (σ), those readings have a 99.73% confidence factor (see Figure 1). 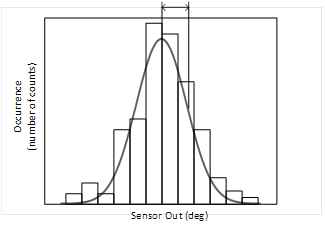 As the resolution increases due to more samples being filtered, the time constant τ (µs) of the filter increases and its bandwidth falls. As the filter’s time constant increases and its bandwidth decreases, the sensor’s ability to react to speed change becomes slower, i.e. it takes longer to catch up with the change. The time taken after power-up for the sensor to reach the target output accuracy for a particular filter window size setting also increases as the filter window size increases, because the filter has to load more samples initially. Therefore, the sensor’s output resolution increases at the cost of filter bandwidth and dynamic response to speed changes.

Table 1 shows a summary of the adjustable filter window settings for the MA732 and MA330, as well as the default settings for other MagAlpha parts in the same family.

The structure of the filter is such that is does not introduce additional latency for steady-state conditions (e.g. when the sensor magnet is rotating at a constant speed or is stationary). The total processing delay from the Hall sensor front-end to the SPI angle reading at the output is typically fixed at 10µs for the MagAlpha devices listed in Table 1 under steady-state conditions.

The filter transfer function can be calculated with Equation (1):

Where τ is the filter’s time constant, which is related to the filter cutoff frequency by Equation (2):

At constant speed, the angle lag caused by the fixed 10µs latency can be calculated by multiplying this latency by the rotation speed in degrees per second using Equation (3):

Under change of rotation speed (acceleration or deceleration) the digital filter adds an additional delay that is dependent on the filter’s time constant and the time period of the speed change.

The additional angle lag under speed change (constant acceleration) can be calculated with Equation (4):

Where “a” is the rate of speed change in degrees per second per second, and τ is the filter’s time constant.

For example, if the MA702 τ value is 1ms and the MA730 τ value is 16ms, one can see the effect the filter time constant has on the angle error during speed change. Based on this, it is possible to determine the effect of accelerating from 0rpm to 10,000rpm in, for example, 250ms.

The effect of the acceleration period and target rotation speed can be calculated with Equation (4).

The above example illustrates how longer filter time constants can significantly affect the additional angle lag error during the speed change. For this reason, it is important to consider the maximum rotation speed and maximum rates of speed change for the target system when choosing the MagAlpha sensor version.

It can be tempting just to select the part with the highest output resolution, but this is often a mistake as the filter response may be too slow for the system requirements.

To avoid instability in the system control loop design, the filter time constant τ should ideally be about 10 times smaller than the loop time constant.

After the acceleration period, the AngleLagDynamic reduces to zero and the angle lag is the fixed latency AngleLag_fixed based on the rotation speed and 10µs filter latency.

Filter Window and Effects on the ABZ Interface

The ABZ interface outputs incremental quadrature pulses on two channels (A and B), plus an index pulse (Z) once per rotation. Channels A and B are phase-shifted 90 degrees, which indicates the direction of rotation based on the phase sequence (see Figure 2). 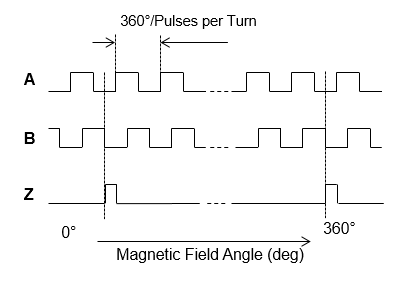 The number of pulses per channel per turn is programmable by the user in all MagAlpha parts with an ABZ interface. For most parts, the maximum ABZ pulse count per turn and hysteresis settings are fixed at a value that guarantees reliable operation at the minimum recommended magnetic field and maximum temperature stated in the datasheet.

In contrast, the MA732 and MA330 allow the user full access to configure a higher ABZ pulse count for a given resolution and to adjust the hysteresis. Care must be taken to ensure that adequate hysteresis is applied for the chosen pulse per turn count to ensure no spurious edges due to filter noise (see Figure 3). 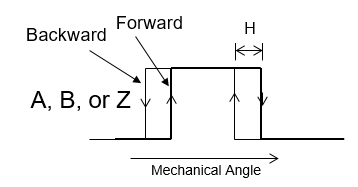 Performance of the ABZ interface is directly related to the noise level at the output of the digital filter. In general, it is recommended to set the hysteresis at 12 times the 1-sigma noise level. The 1-sigma noise is defined for each filter window setting (see Table 3). Table 2 and Table 3 show the adjustable settings in the MA732 and MA330.

The hysteresis value of 0.52 degrees is much larger than ideal for such a small AB step size of only 0.088 degrees, but has to be at this high value due to the 0.02 degrees of 1-sigma noise for the 11.5-bit resolution setting. This means that when changing direction, the next AB edge will not occur until after the 0.52 deg hysteresis is exceeded, which can also be described as a 0.52 degree shift in AB edge positions from clockwise to counter-clockwise rotation. This is the trade-off of having to apply more hysteresis to support the higher pulse-per-turn count for a given resolution.

When configuring the ABZ settings for the MA732 or MA330, the hysteresis value should be set at least twice as large as the random ABZ jitter for a given PPT setting to avoid spurious edge transitions.

The filter window (FW) setting in the MagAlpha family controls the sensor’s output resolution. Though it may be tempting to simply choose the highest resolution, the designer should take into account the impact that the filter’s time constant has on the sensor’s reaction time to speed changes. The resolution and resulting filter response time should be matched to the required system control loop performance.

The filter window, ABZ pulse count per turn, and ABZ hysteresis settings should be optimized to the requirements of the final system, taking into account the performance trade-offs discussed above.

The next MagAlpha article will discuss the types of magnets that can be used with MagAlpha angle sensors, and the things to consider in choosing the correct materials, size, and performance.

5 Comments
MP6519 Vcc Output Current
Dear Madame or Sir In the datasheet of the MP6519 the VCC pin is described as 5V LDO output for internal driver and logic. How much current can be dr...
MOTOR DRIVERS/SENSORS