Inductors are relatively simple components, comprised of an insulated wire wound in a coil. Complexity arises when individual components are combined to create an inductor with the proper size, weight, temperature, frequency, and voltage to meet a target application.

When selecting an inductor, it is important to understand the electrical characteristics noted in the inductor’s datasheet. This article will provide guidance on how to select the optimal inductor for a solution while predicting the inductor’s performance when designing a new DC/DC converter.

What Is an Inductor?

An inductor is a component in an electrical circuit that stores energy in its magnetic field. Inductors convert electrical energy into magnetic energy by storing, then supplying energy to the circuit to regulate current flow. This means that if the current increases, the magnetic field increases. Figure 1 shows an inductor model. 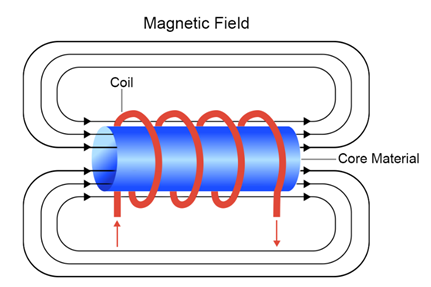 Figure 1: Electrical Model of an Inductor

Inductors are formed using insulated wire wound as a coil. The coil can be different shapes and sizes, and can be wound using different core materials.

The inductance is dependent on multiple factors, such as the number of turns, core dimensions, and permeability. Figure 2 shows key inductor parameters.


Common inductor parameters are described in more detail below.


Based on Table 2, the magnetic flux concentration depends on the core permeability and dimensions.

Figure 3 shows a coil without a core. 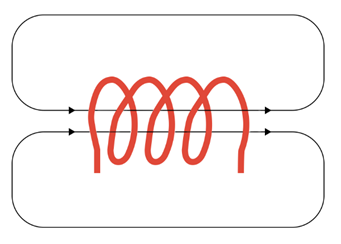 The air coil’s permeability is a constant value (µr air) that is about equal to 1.

Figure 4 shows an inductor with a core. Note that when a core is used, the magnetic field is intensified. 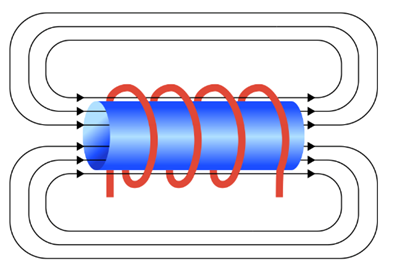 Figure 4: Inductor with a Core

Inductance is the ability for an inductor to store induced electric energy as magnetic energy. An inductor must supply constant DC current to the output load while being driven by the switching input voltage.

Table 4 shows the relationship between the current and the inductor’s voltage. Note that the voltage across the inductor is proportional to the change of current with respect the time.


First, determine the inductance range for your design, keeping in mind that inductance is not constant across operating conditions. Inductance can change as frequency increases, which requires special consideration for applications with higher switching frequencies. Inductor manufacturers typically test inductance at frequencies between 100kHz and 500kHz, since most DC/DC converters operate within this range.

The inductor’s current resistance results in heat dissipation, which affects efficiency. The total copper losses are comprised of the RDC and RAC losses. RDC is constant regardless of the frequency, while RAC is dependent from the frequency. Table 5 shows how to calculate RDC.


The only way to reduce copper losses is to increase the area of the wire, either by switching to a thicker wire or using a flat wire. When using a flat wire, the winding window is completely used, which results in a lower RDC. Table 6 shows the cross-section area for a round wire versus flat wire.


Table 7 compares the advantages of round and flat wires.

Table 7: Round vs. Flat Wires

Generally, the magnetic properties required for core-based inductors can be met with ferromagnetic material. Depending on the core’s material, the relative permeability of this inductor ranges between 50 and 20000.

The ripple current (∆IL) is the amount by which the current changes during a switching cycle.

The inductor may not perform properly when it operates outside of its peak current range. An inductor’s ripple current is typically designed to be within 30% to 40% of the IRMS.

The rated current refers to the DC current required to increase the inductor’s temperature by a specified amount. The temperature rise (ΔT) is not a standard value, though it is usually between 20K and 40K. 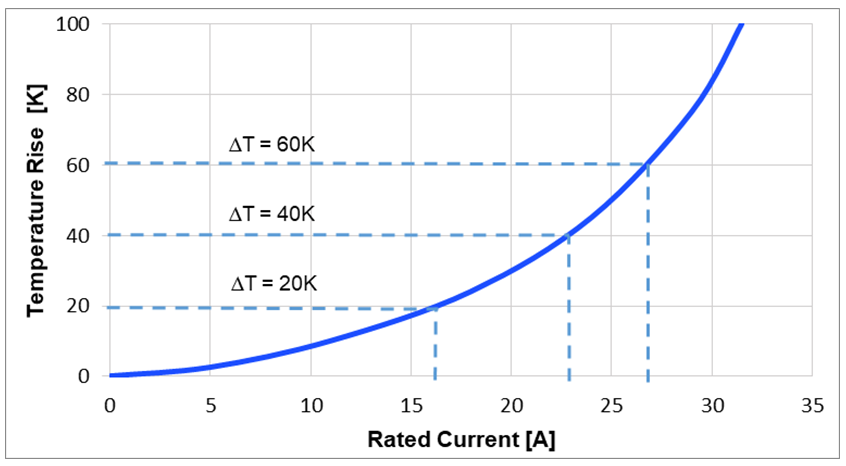 The operating temperature (TOP) in an application is determined by the ambient temperature (TAMB) and the inductor’s self-heating value (ΔT). TOP can be estimated with Equation (2):

The given rated current is a good way to estimate an inductor’s temperature rise. Temperature increase is also influenced by the circuit design, PCB layout, proximity to other components, and trace dimensions and thickness. Additional heat may also be caused by an excess of AC loss generated in the inductor core body and windings.

Use an inductor with a larger package size if lower self-heating is required.

The saturation current ratings refer to the DC current that the inductor can support before the nominal inductance drops by a defined percentage.

The reference percent drop is unique to each inductor. Generally, manufacturers set this value between 20% and 35%, which can make comparing inductors difficult. In datasheets, it is common to find a curve showing how the inductance changes in relation to the DC current. This curve can be used to evaluate the entire inductance range and how it corresponds to the DC current.

The DC saturation current depends on the temperature and the inductor’s magnetic material and the structure of its core. Different structures and magnetic cores can affect ISAT.

Ferrite drum cores are the most common, and they are characterized by a hard saturation curve (see Figure 7). Is it critical to ensure that the inductor does not operate beyond the drop point, as the inductance drops significantly and functionality is reduced beyond this point. 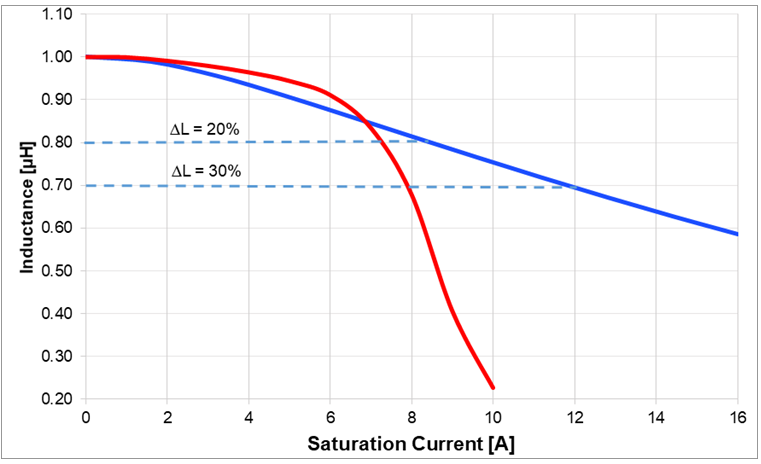 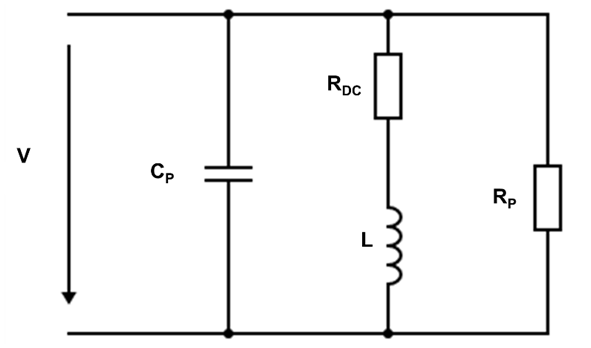 Beyond the resonant frequency (shown as the red curve Figure 9), the inductor displays capacitive characteristics that correspond to a decreasing impedance. After this point, the inductor does not function as expected.

Figure 9 shows the relationship between inductance and frequency.

Selecting a Cost-Effective and Compact Inductors

It is simple for a designer to choose a sufficient inductor once they understand the basic meaning behind each parameter in an inductor’s datasheet. However, if a designer knows the details behind each parameter, they can choose the optimal inductor for a DC/DC converter application, and predict how the system will perform under different conditions.

There are a wide variety of inductors on the market for different applications, and it can be difficult to select the optimal inductor. For example, larger-value inductors reduce DC losses an improve efficiency, but they are physically larger and they retain more heat.

Because there is no one-size-fits-all inductor, it is vital to understand each inductor’s parameters, as well as the relationships between different parameters. This can help designers determine how an inductor would perform in a particular DC/DC application, and aid in inductor selection when looking at MPS’s semi-shielded inductors and molded inductors.

Questions answered by MPS engineers in 24h
Estimating inductor losses in buck converter
I have a buck converter running at 650kHz, 12V output voltage at 10A max and an input voltage range from 35V to 60V. As the inductor I chose the SRP12...
INDUCTORS

4 Comments
Choosing an MPS inductor
The MP2225 is a good fit for my requirement, 12V input, 3.3V out with 4A maximum load. What is a good way to choose an MPS inductor for this applicat...
INDUCTORS

2 Comments
MPS Inductors for Filters
The MPQ4572 data sheet shows a 4.7uH inductor in the EMI Pi filter for the typical application. Can an MPL inductor be used for this filter applicati...
INDUCTORS