The Difference between CCM and DCM Explained

Flyback converters are often used in switch-mode power supplies for AC/DC and DC/DC conversion, especially for the low-to-mid power range (about 2W to 100W). In this power range, flyback converters offer a very competitive size, cost, and efficiency ratio.

A flyback converter’s operation is based on a coupled inductor, which — in addition to aiding in power conversion — also provides isolation between the converter’s input and output. Other than that, it has the same basic elements as other switching converter topologies: two switches (MOSFET and diode) and an output capacitor.

A flyback converter has two operation phases, tON and tOFF, which are named after and controlled through the MOSFET’s switching states.

During tON, the MOSFET is on and current flows from the input through the primary inductor, linearly charging the coupled inductor and creating a magnetic field around it (see Figure 1.b). In the secondary side, the rectifier diode is reverse-biased, disconnecting the transformer from the output (see Figure 1.a).

Figure 1: a) Voltage in MOSFET and Diode b) Current in Primary and Secondary Coils

The charge stored in the output capacitor is responsible for maintaining a stable voltage at the load (see Figure 2).

A flyback converter’s two operation modes seem very similar, but each has its own set of advantages and drawbacks. It is very important for designers to consider these advantages and drawbacks during the design process, as the selected operation mode has significant effects on the efficiency, transformer, regulation, EMI, and cost of the power converter. Figure 3 and Figure 4 show the differences between CCM and DCM operation. 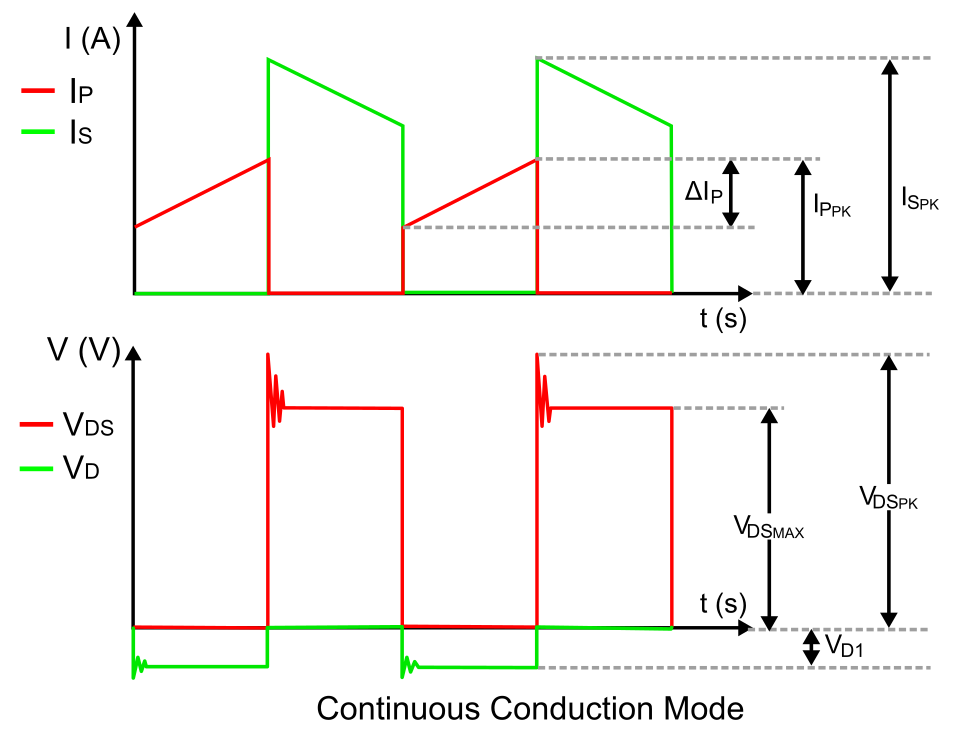 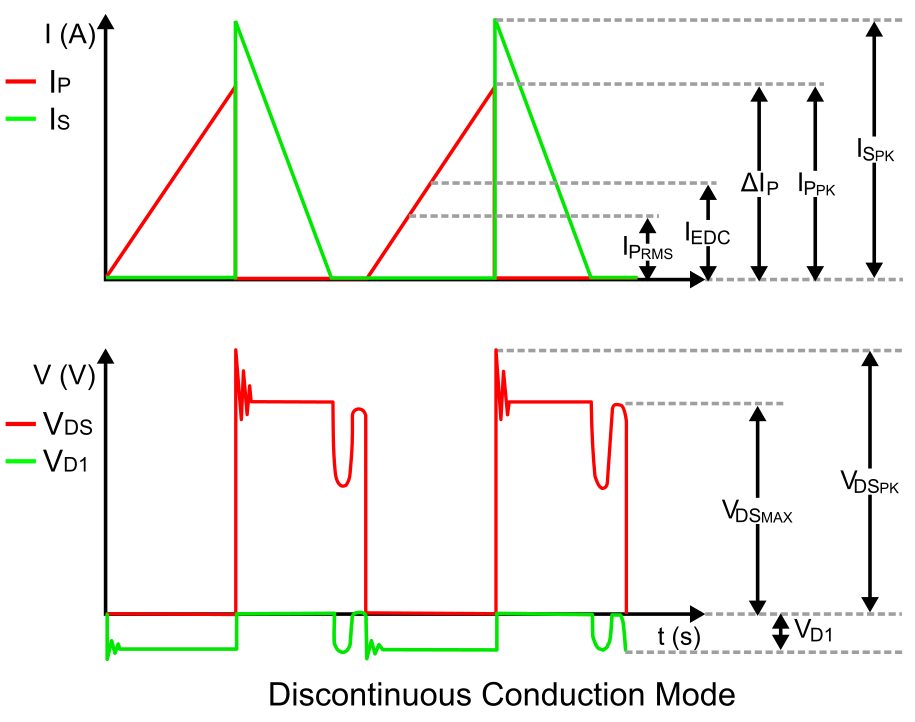 DCM offers higher efficiency than CCM, due to the lack of reverse recovery loss on the diode and a softer turn on of the MOSFET. However, if the duty cycle is too small, then the current that charges the primary inductor will be very high, which lowers the converter’s overall efficiency. Thus, a reasonable duty cycle must be chosen for DCM to take advantage this benefit.

Regarding regulation and stability of the system, a flyback in DCM is easier to compensate than a flyback in CCM. This is because the problematic right-hand plane zero (RHPZ) appears and introduces instability at lower frequencies when the converter operates in CCM. DCM pushes the RHPZ to higher frequencies, making the loop easier to compensate, and therefore offering faster transient response than CCM.

Furthermore, when working with duty cycles above 0.5, subharmonic oscillation may occur in CCM flyback converters, which means slope compensation is required.

On the other hand, DCM flyback converters also implement zero-current switching (ZCS), which makes it more energy-efficient, as it reduces the rectifier diode’s reverse recovery. This soft switching affects efficiency and has a strong effect on EMI, because the fast-recovery diodes that must be used in order to reduce energy loss also generate very sharp voltage spikes in the secondary side, which cause ringing and can be a source for high-frequency differential-mode noise. To solve this, a snubbing circuit must be implemented to reduce these peaks and ensure compliance with electromagnetic compatibility (EMC) standards and regulations.

MPS offers a large variety of flyback converters that can operate in both operation modes, as well as reference designs, tools, webinars, and other articles that help you understand the theory behind flyback converter design, speed up the design and component selection process, and avoid any unexpected behavior in your circuit. To learn more, explore our flyback solutions and our Flyback Design Tool.

2 Comments
MP174A Input Voltage Range
Hello, We have been meaning to design a DC-DC converter that supports 35-100VDC input with 0.25A output at 15VDC. We came across MP173A and MP174A. Ac...
AC-DC POWER CONVERTERS