An unstable power supply can cause severe system issues, such as audible noise from the passive components, unexpected jittering in the switching frequency, extreme oscillations on the output voltage during load transient events, and failures in the semiconductor switches. While there are various reasons for instability, an un-tuned compensation network accounts for majority of instability issues in switching power supplies. This article provides guidance on how to find out whether or not the source of instability is an un-tuned compensation network, and offers quick tips to improve the stability of unstable power supplies.

Transient performance of a switching power supply is characterized by two main criteria: the bandwidth (BW) and phase margin (PM). A higher BW results in a faster transient response. A higher PM, on the other hand, means better stability. To obtain an acceptable transient performance, a high BW and high PM are required. There is, however, a tradeoff between BW and PM. Techniques that increase BW generally reduce PM, and vice versa. 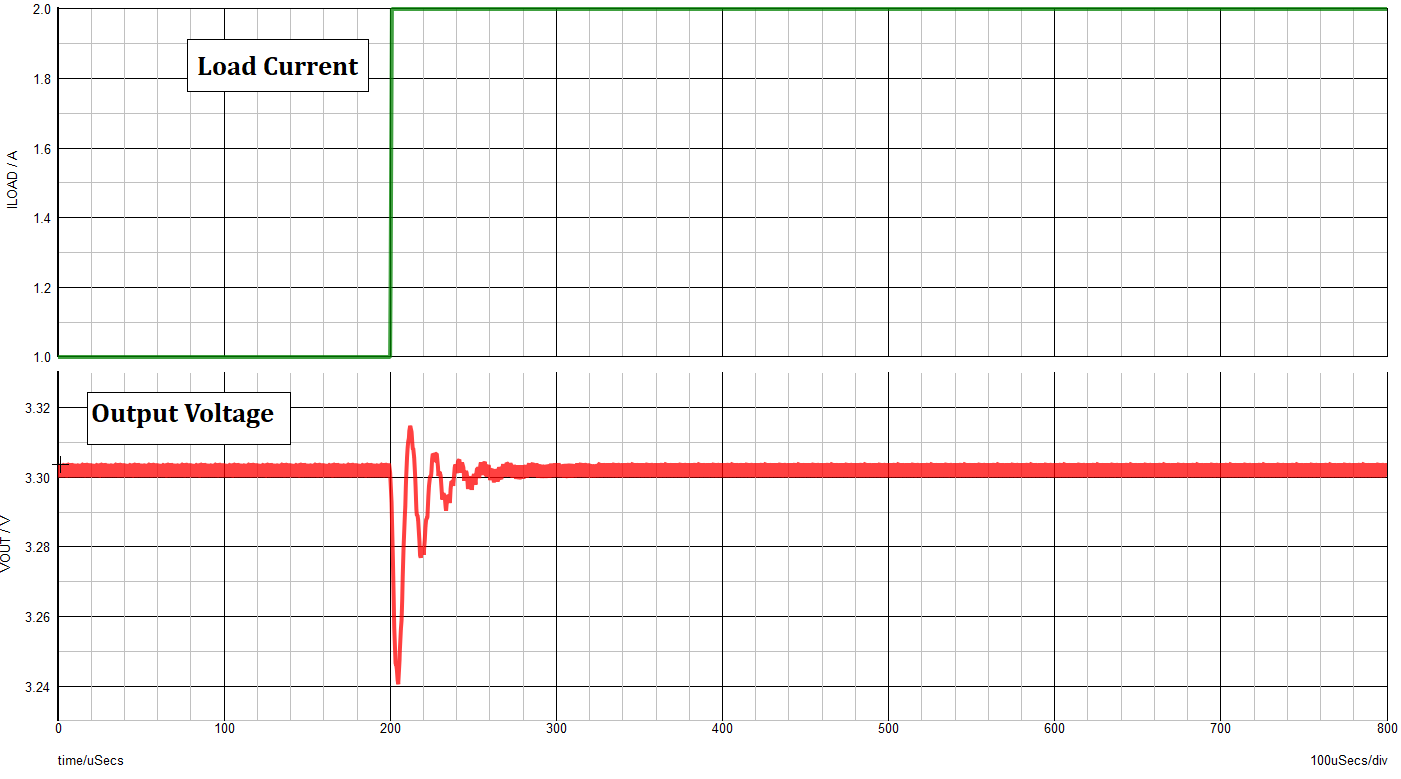 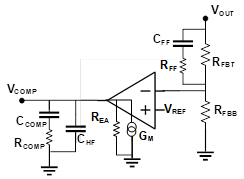 The goal of this article is to show how simple techniques can be used to stabilize an unstable power supply. Note that the proposed techniques will only be effective if the source of instability is an un-tuned compensation network. 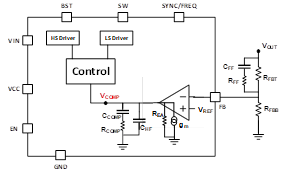 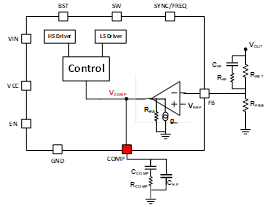 As discussed earlier, the instability in a switching regulator can be verified by looking at its transient response to a load change.

Note that in noise-sensitive applications, the BW must be further limited to less than 5% of the switching frequency. 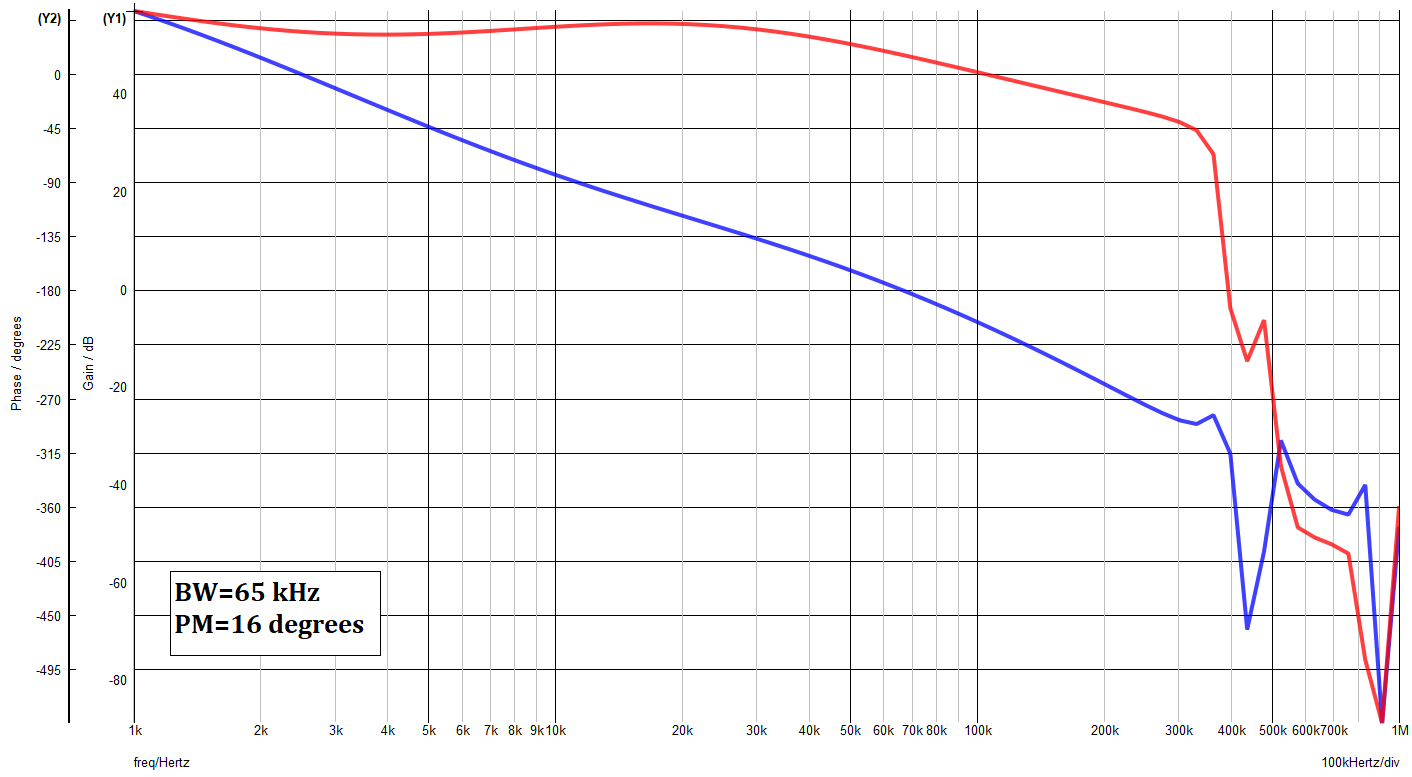 Figure 4: Bode Plot for the Power Supply in Figure 1

The techniques presented below will allow readers to quickly fix unstable switching power supplies, while offering methods to see if reducing BW can improve stability. If the stability is improved as the BW is significantly reduced, that’s confirmation that the source of instability was an un-tuned compensation network.

Note that BW reduction does two things to improve the stability. First, it makes the control loop slower. The slower control loop prevents or limits sharp spikes and/or oscillations on the output. Second, reducing the BW can increase the PM, which in turns improves the stability. 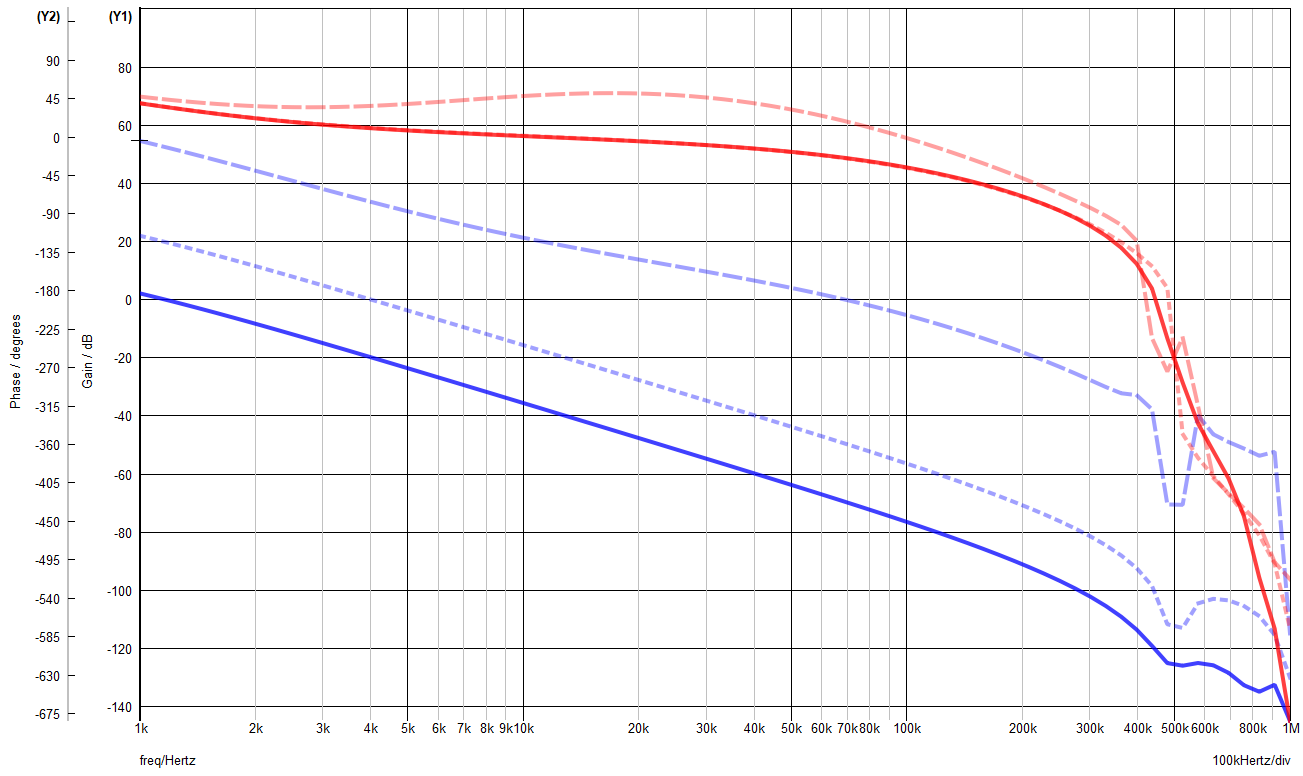 Figure 5: Effect of Adding a Big Capacitor to the COMP Pin

Regulators with an Internal Compensation Network

For regulators with an internal compensation network, the COMP pin is not available. Therefore, external knobs must be used to reduce the BW and improve stability. The most effective method to limit the BW of a switching regulator with an internal compensation network is using a resistor in series with the feedback pin (called a FB-series resistor).

Figure 6 shows the impact of adding a FB-series resistor. This resistor shifts the magnitude curve down with a minor impact on the phase curve. Therefore, it effectively limits the BW and increases the stability of the power supply. The bigger the FB-series resistor, the greater the BW reduction. Typical FB-series resistors should range between 5kΩ and 100kΩ. 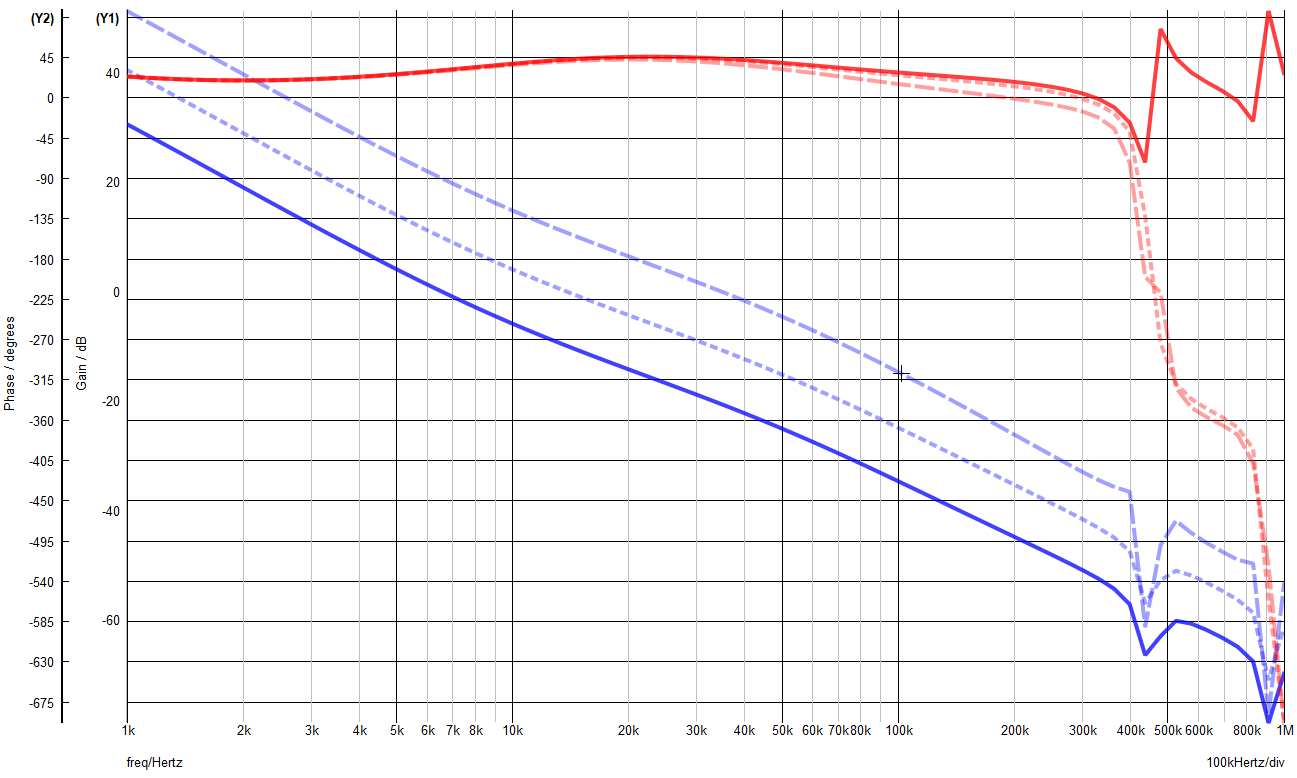 Verification of Proposed Techniques for Troubleshooting an Unstable Power Supply 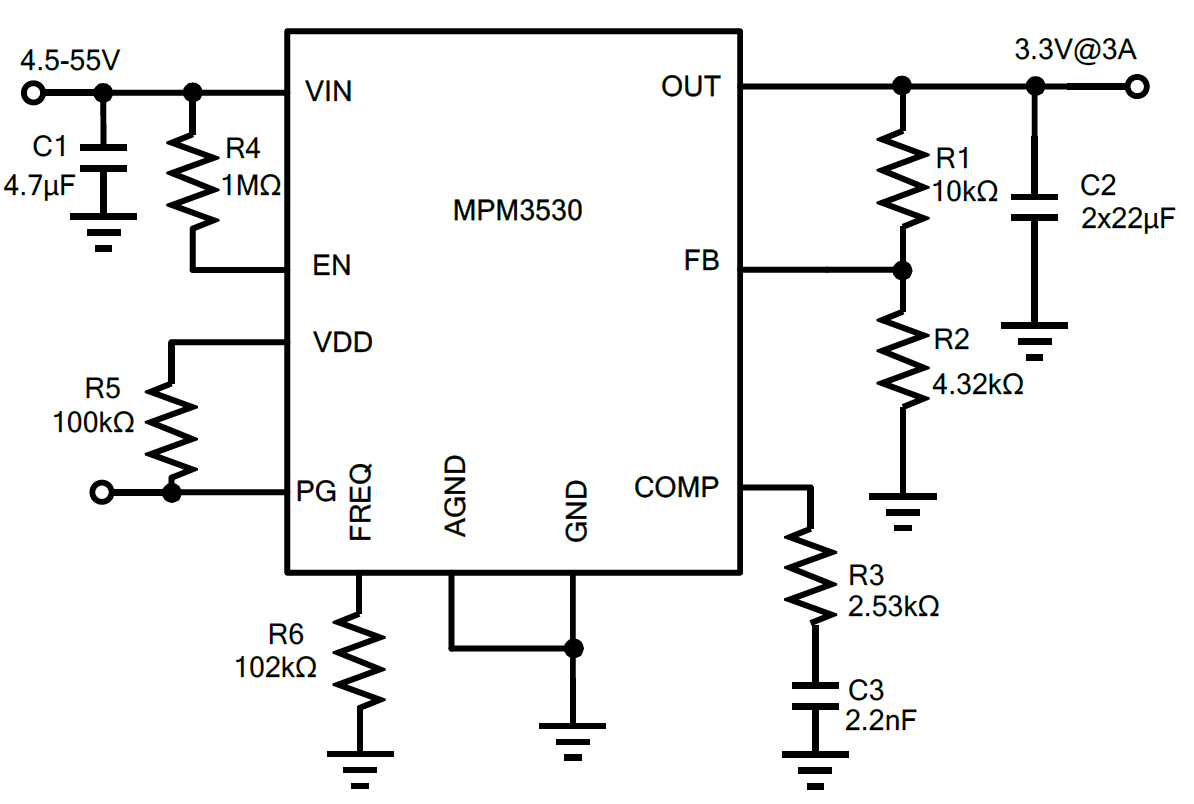 To show the effectiveness of adding a big capacitor at the COMP pin, consider the MPM3530. In this example, the compensation network components are chosen such that the regulator becomes unstable. This is done by increasing R3 in Figure 8(a) from 2.53kΩ to 16kΩ. Figure 9 shows the MPM3530’s transient response and its bode plot. The high number of oscillations on the output represent the low stability. The small PM of only 2° on the bode plot confirms the low stability.

Figure 10 shows what happens to the transient response once a 1µF capacitor is added to the COMP pin. The high oscillations on the output are damped, which means stability has improved. The bode plot shows that the BW has reduced significantly, as expected. The BW reduction results in a major PM increase, which then improves stability.

However, the improvement in stability is achieved at the expense of a slower response; the output voltage settling time has increased significantly, from 300µs to 2ms. Also note that due to a slower response to the load change, the maximum voltage undershoot is increased to 700mV, compared to 15mV in Figure 9.

Figure 10: Stability Improvement Effect of a Big Capacitor at the MPM3530’s COMP Pin

As shown in Figure 8(b), the COMP pin is not available in regulators with internal compensation networks, such as the MPQ4420. Figure 11 shows the transient response of the MPQ4420 without any FB-series resistor (e.g. R3 is set to 0Ω in Figure 8(a)). The high oscillation on the output voltage during load transition demonstrates low stability. Looking at the bode plot, the BW is 72kHz while the PM is only 11°. Since the MPQ4420’s default switching frequency is 410kHz, the BW must be limited below 41kHz.

Figure 12 shows how changing R3 from 0Ω to 51kΩ significantly reduces oscillations during transient response. As expected, introduction of the FB-series resistor shifted the magnitude curve down, which means a lower BW and higher PM. In this scenario, the new BW is 21kHz and the PM has improved from 11° to 43.5°.

Despite the higher stability and fewer oscillations on the output shown in Figure 12, the PM is still below the 60° target. Further BW reduction will not provide any additional boost to the PM, and it further slows down the response time. As learned earlier, lower BW also increases the magnitude of voltage undershoot.

An additional knob can be used to improve the PM without making the regulator slower by sacrificing the BW. This solution is a feed-forward capacitor (CFF).

Because this is a Type-II internal compensation network, it does not provide any phase boost. If phase boost is required, add CFF on the feedback network (see Figure 13). CFF adds another zero to the compensation network, which can boost the PM without reducing the BW. In fact, if the capacitor is selected properly, the PM can be improved and the BW can also be increased to achieve a faster transient response.

Figure 14 shows the transient response and the bode plot for the MPQ4420 with a 19kΩ FB-series resistor and a 220pF CFF. As shown here, the BW has increased to 40kHz, which is exactly 10% of the switching frequency, and the PM has reached 78°, which is in line with the target PM of >60°.

This article explored several quick tips to diagnose and solve instability problems in switching power supplies. Separate techniques were proposed for stabilizing regulators with an external compensation network vs. regulators with an external compensation network. The effectiveness of the proposed techniques were verified by applying them to the MPM3530 and MPQ4420 from MPS, and this article demonstrated how a feed-forward capacitor can further improve a switching regulator’s transient response.

Questions answered by MPS engineers in 24h
MPM3530 in Parallel
Is it ok to connect the output of two buck converters(MPM3530) in parallel? Does connecting the outputs in parallel mess up the maximum capacitance va...
DC-DC POWER CONVERTERS