Every switch-mode power supply presents a wide-band noise source. Integrating a DC/DC converter from the car board net into an automotive control unit and still fulfilling the EMC requirements of automotive OEMs is a difficult task.

Typically, noise from the DC/DC converter and other high-speed circuits radiates via connected cables that provide an effective antenna path. To block this potential radiation path, filter circuitry is required at each cable connection point. This filtering is only effective if no H- or E-fields from the noise source couple into the filter components or cables.

In close-field environments, the amplitude of the fields falls by 1 over distance squared (1/d2). Therefore, a certain minimum distance is required between the noise source, filter components, and connector.

Unfortunately, PCB size and connector positions for the cables are usually pre-defined by mechanical constraints. Additionally, the maximum component height may be very limited in certain areas of the PCB, and two-sided assembly may not be possible. These conditions necessitate careful component placement and PCB layout — especially when working within highly regulated industries such as automotive manufacturing.

To avoid directly coupling the E- and H-fields of the DC/DC converter into connectors and cables, the circuit must be placed as far from the PCB connection points as possible (see Figure 1).

Only distance or additional shielding can reduce the field strength at the EMC filters, connector and cable to the necessary low levels. Shielding can replace distance!

It is best to use a two-side assembled PCB with at least four layers, where the DC/DC circuit and filter components are placed on opposite sides of the board. At least one inner layer should be solid GND to minimize cross-coupling from the noise source into the filter circuits.

In systems where the DC/DC circuit must be placed very close to the connector, effective shielding must be considered early in the design process. Thermally necessary heatsinks can sometimes be utilized for shielding. Ideally, the inductor, the DC/DC IC with power MOSFETs, and its decoupling capacitors are all located under the shield.

In a step-down converter, the main field sources are:

AC-magnetic fields are shielded by solid metal areas that allow the induction of eddy currents. Due to its high conductivity, copper is very effective. Any conductor in the path of the potential difference that returns to a fixed potential on the PCB will effectively shield E-field radiation.

Any high di/dt loop radiates H-fields proportional to the loop area and current amplitude. Place the input capacitor close to the two power switches with a low-impedance connection to minimize the antenna loop area.

To further reduce the magnetic fields from this loop, place two sets of capacitors symmetrically at the power switches. Ideally, the peak currents in both loops will be half of the original, reducing the H-field by 6dB. The orientation of the two loops is opposite, which further reduces the radiated H-field. (1)

This reduces H-field radiation from the component side of the PCB. In an ideal case (super-conduction, zero distance, and perfect matching of both loop shapes), it would be canceled by the H-fields from the eddy currents.

Since the GND copper area under the DC/DC circuit has impedance, the high di/dt eddy currents create potential differences and make the area noisy. This noisy GND area must be separated from the system GND area, especially from any GND reference for filters and connectors. In a multi-layer PCB, these are separated by shaping the individual layers and by the impedance of the connecting vias between them.

A 3-dimensional view of the multi-layer PCB illustrates this concept (see Figure 2). 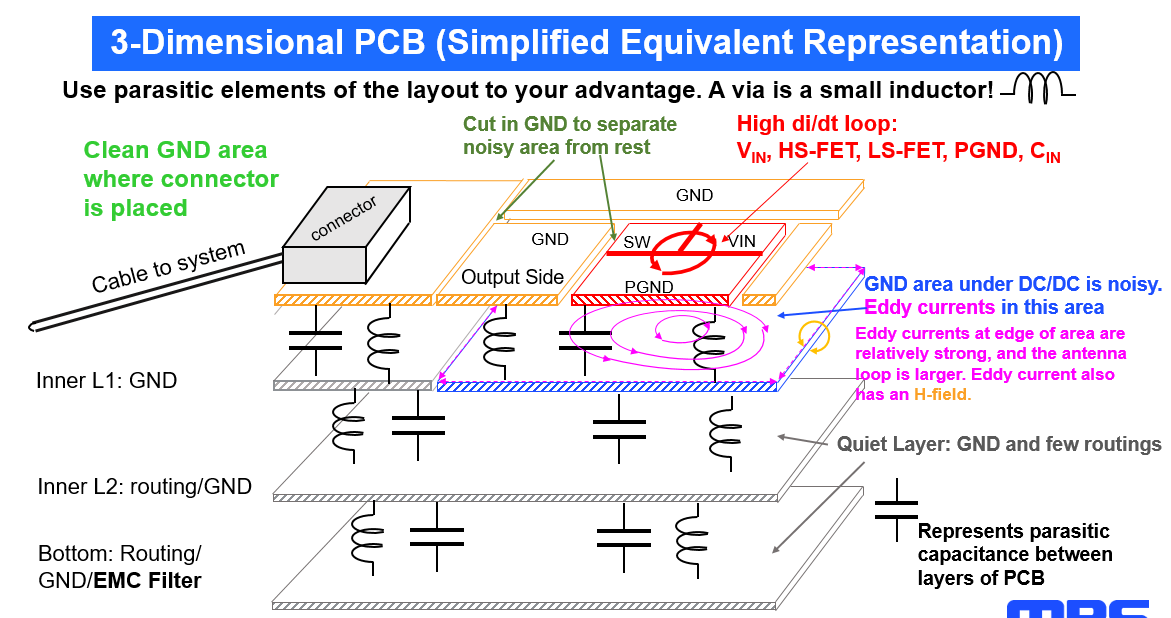 Figure 2: 3-Dimensional PCB View – Layout is Part of the Circuit

On the top layer, the input capacitor (CIN) and the two power FETs join a VIN area and a PGND area (shown in red) that are connected to inner layers through vias. For the VIN path, the component after the vias must be an inductive element (e.g. a 1µH to 2µH coil). The high di/dt current from the switch transition is then forced to flow only in CIN, and not across the PCB.

The PGND area is not directly connected to any other GND on the component side, only through vias to the PGND area under the DC/DC block (shown in blue). The goal is to keep high-frequency currents on the component side, separating the noise from the “outside world.” At least one layer should be solid GND for the full size of the PCB to provide a low-impedance system reference. Remember, layout is part of the circuit.

Should Copper Be Placed Under the Inductor?

Some PCB layout tools have a pre-setting that does not allow copper under an inductor core. Views on this topic range from no copper at all to copper directly under the coil on the component side of PCB. 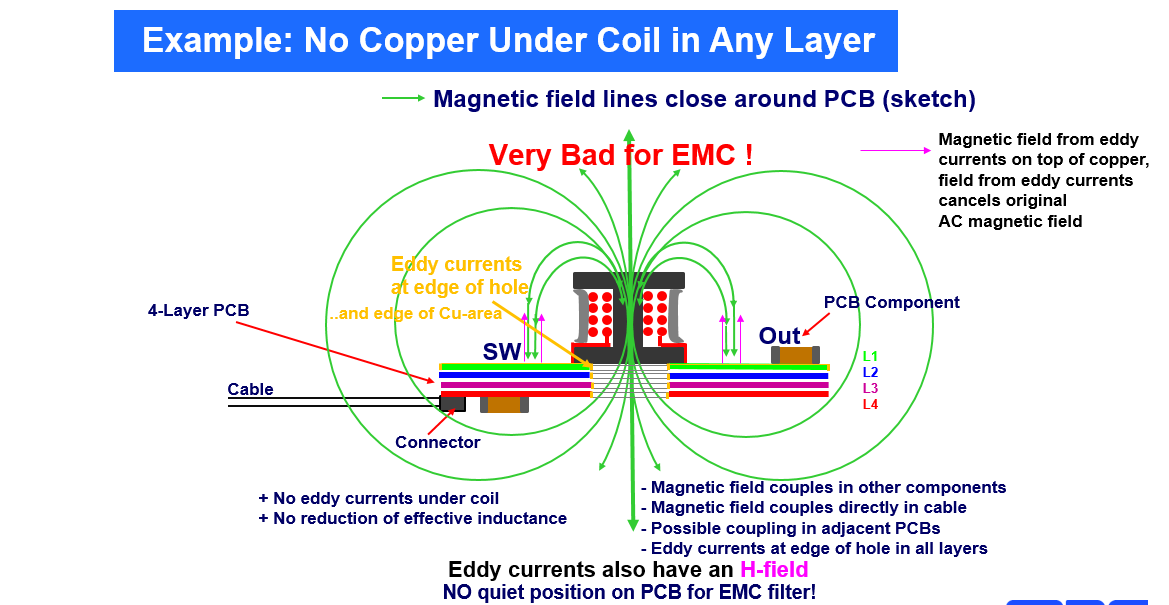 Figure 3: 4-Layer PCB with No Copper Under the Coil

Figure 3 shows a sketch of the magnetic fields around the coil with no copper under the coil in any layer of a 4-layer PCB. The strong magnetic field lines from the coil are present on the bottom side of the PCB and close around the PCB, effectively coupling into any connected cable. Filter components on the PCB are bypassed through the air. This makes it very difficult, if not impossible, to meet automotive OEM EMC levels.

Figure 4 shows the PCB layout with copper directly under the coil on the component side. 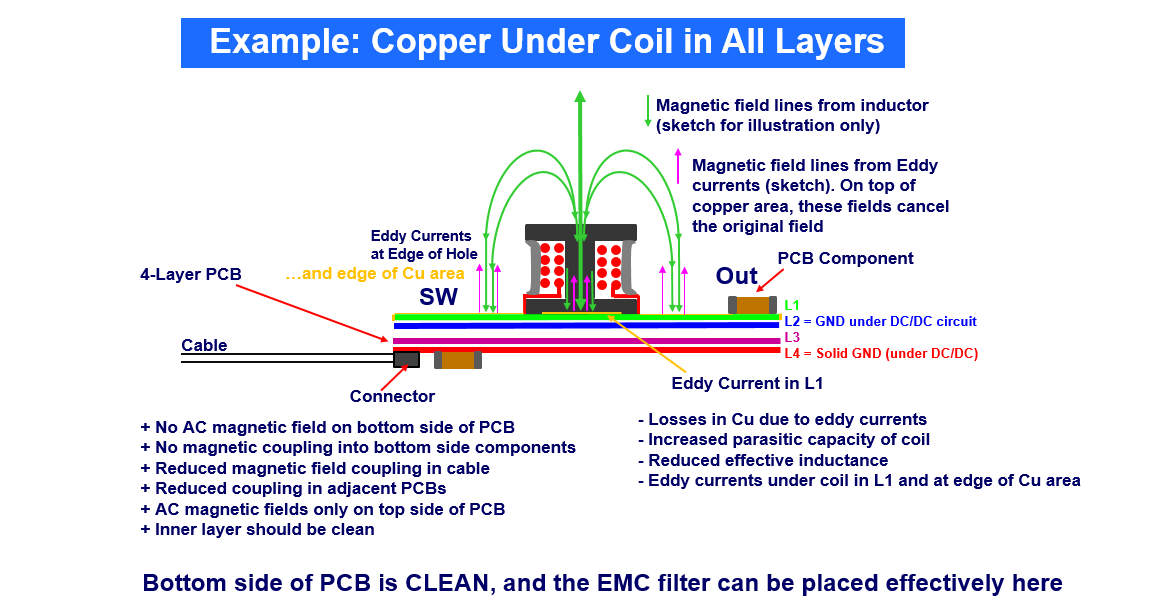 Figure 4: Effects of Copper Under Coil in PCB

This provides an area for eddy currents to cancel the magnetic field already on the outside of the PCB. Inner Layer 2 and Bottom Layer are clean. EMC filter components can be effectively placed on the bottom side. The magnetic field of the eddy currents somewhat reduces the effective inductance of the coil (typically less than 5%). The eddy currents also create some losses in the GND copper. Another small disadvantage of copper directly under the inductor core is an increased parasitic capacitance from the winding to GND. However, in most designs this effect is not dominant as the capacitance is very low.

The MPQ443x family are 40V synchronous buck converters with low operating quiescent current and output currents from 1A to 3.5A, ideal for automotive and industrial applications.

On the top side of the PCB, the MPQ4430 IC (U1) has symmetric CIN sets (C1A-C1D). The GND of these capacitors is directly connected to the IC PGND pins, which is the source of the bottom FETs. This local GND area is very noisy. On the component side, this GND area is not directly connected to any other GND area. The only connection is through vias to the GND area in the layer under the DC/DC circuit. In this configuration, the high di/dt current from the power stage stays on the component side. The highest current density is on the inner edges of the traces, between VIN and PGND, shown in the green ellipse of the example (see Figure 5). 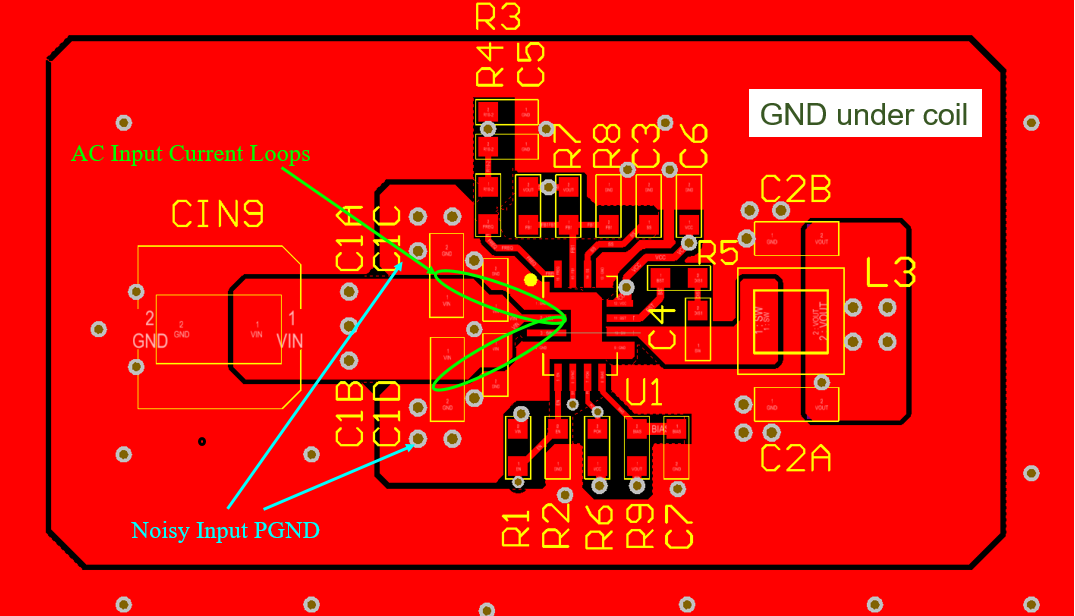 VIN is connected to Layer 3 by vias. Due to the vias’ inductance, the high-frequency part of the input current remains on the top side. CIN9 damps this VIN node at the IC, but as it is 6mm high and cathode-connected to GND, it also blocks part of the E-field radiation from the SW node and coil.

The cut around the DC/DC block on the top side keeps all high-frequency current within this area. Without the cut, a fraction of the hot loop currents would still flow at the corner of the PCB, making the area noisy.

One trick to reduce E-field radiation from the coil is to place the output capacitors (C2A & C2B) on both sides of the coil. This works best if the capacitors are as high as or higher than the coil. In general, a smaller-sized, lower-profile inductor typically provides better EMC performance than a larger, higher coil. 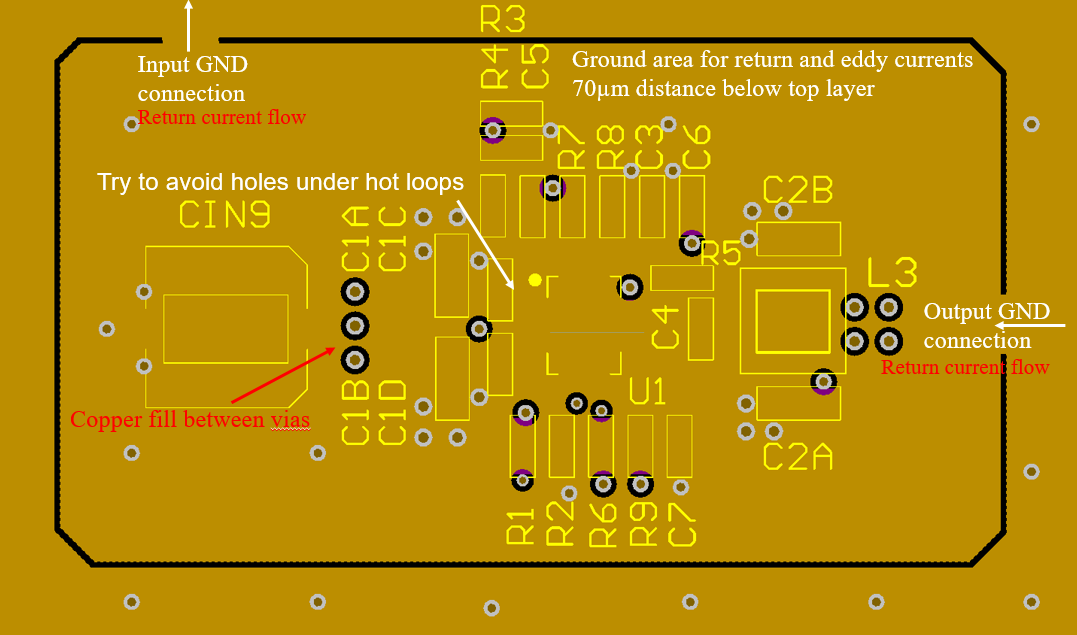 Inner Layer 1 of the EMC-optimized board is GND. It should be placed 70µm under the top side (see Figure 6). This GND area is noisy. A cutout in the GND area around the DC/DC block prevents residual currents from flowing at the edges of the layer under the connector and filter components. The cut should have two narrow openings exactly where VIN and VOUT are routed to the DC/DC circuit in the layer underneath, providing a defined local return path.

With fSW = 470kHz and spread spectrum frequency modulation (SSFM), the CE test result from 30MHz to 108MHz is about 0dBµV, only a few dB above system noise (see Figure 7). 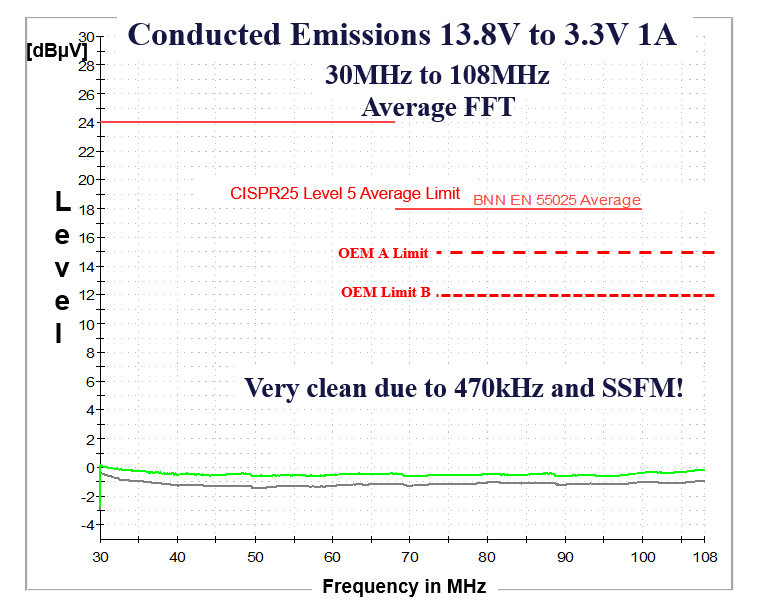 The MPQ4431 switching at 470kHz with a 0805 2.2µH inductor and two 0805 output capacitors passed a low-frequency RE monopole test without additional shielding or SSFM (see Figure 8). 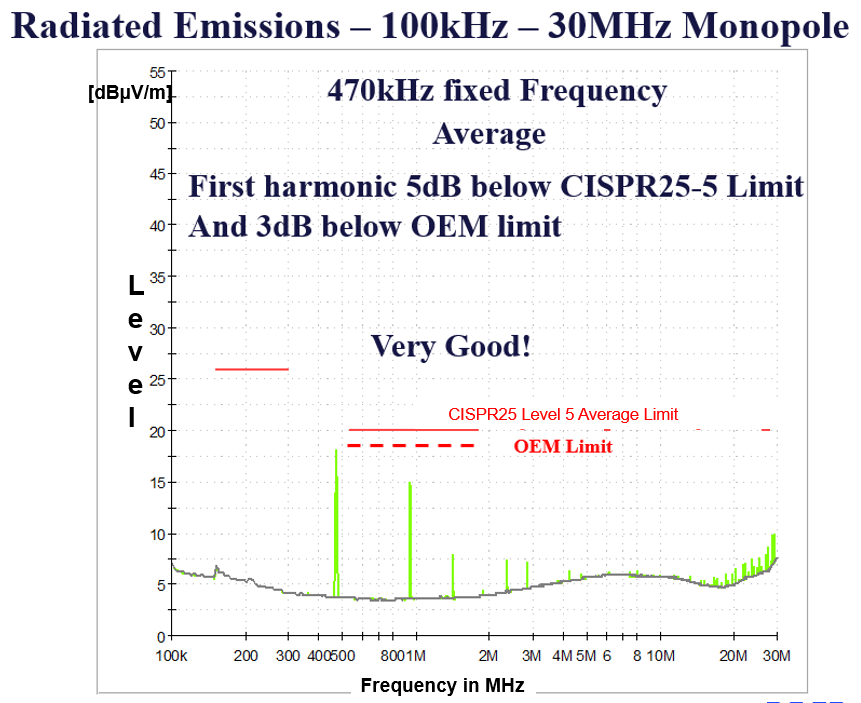 With the view that layout, with its parasitic elements, is part of the circuit, PCB design can be optimized for low EMI in DC/DC converters. The MPQ4431 buck converter from MPS demonstrates that careful component placement and board layout help make it possible to meet the strict EMC limits within the automotive industry.