Switched-mode power supplies (SMPS) have the advantage of high efficiency compared to traditional low-dropout (LDO) regulators. Due to its switching nature, a SMPS emits noise at its switching frequency and its harmonics. This article illustrates the procedure of designing filtering to achieve ultra-low output voltage noise with SMPS regulators. Single-stage capacitive filter is commonly used for DC/DC converter applications. Low ESR ceramic capacitors are utilized to meet output voltage ripple specifications. The single-stage capacitive filter is sufficient for applications that requires no less than 1-2mV of output voltage ripple. For applications such as RF ADC and DAC applications where it is necessary to meet less than 1mV ripple, a second-stage LC filter should be used to effectively suppress the switching noise.

In the subsequent development, it is assumed the buck converter operates under continuous conduction mode (CCM) for output voltage ripple minimization. The inductance of L is designed to meet inductor current ripple requirement. The minimum inductance of L is determined as:

Where VIN and VOUT represent the input and output voltage, respectively,

The output capacitance is selected to ensure that the output ripple is below the specified peak-to-peak value. For a single-stage capacitive filter, an minimum output voltage ripple of 1mV to 2mV can be achieved.

Where T is the period of one switching cycle. By definition, the capacitor charge in a given period is also can also be expressed as:

Equating Equation (2) and Equation (3), the minimum capacitance to achieve the required output peak-to-peak voltage ripple (VOUT,p--p) is determined as:

To demonstrate the impact of loop parasitic inductance, an MPM3833C with various output capacitors issimulated using Simplis. It is assumed that each additional output capacitor introduces an additional 0.5nH of parasitic inductance to the bypassing loop. Figure 3 illustrates the output ripple of the power module with one 22µF capacitor. The bypassing capacitor effectively reduces the output ripple to around 3mV at 5V input, 1.2V output, and 2A load.

Typically, the shunt output capacitor can effectively reduce the output voltage ripple to 1mV. Beyond this point, a second-stage output filter is required to achieve smaller output voltage ripple (-1mV voltage ripple can be achieved). Figure 5 illustrates a second stage LC filter which is cascaded to the first stage output capacitors. The second-stage filter consists of one filter inductor and its series resistor (DCR), a bypassing capacitor branch, and a damping branch. The LC filter works by creating a high impedance to the output. The filtering inductor (Lf) is resistive at the intended high frequency range and dissipates the noise energy in the form of heat. The inductor combines with additional shunt capacitors to form a low-pass LC filter network. 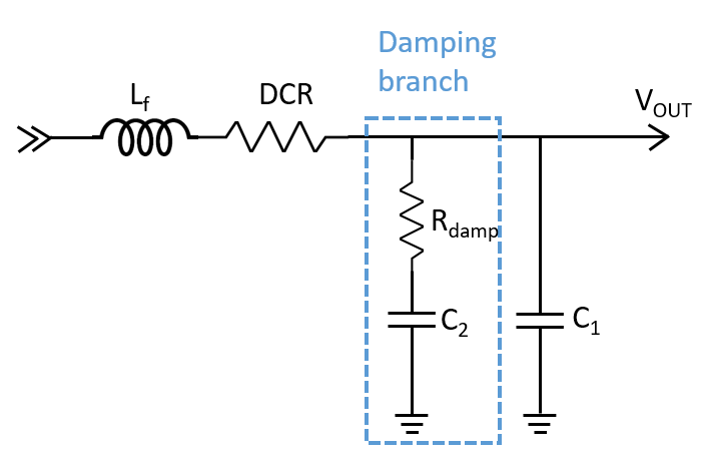 The second-stage filter is very effective for reducing the output voltage noise when properly designed. It is crucial to size the component of the second-stage LC filter for the intended frequency band. The first step of the design procedure involves choosing the first-stage output capacitor based on Equation (4). A 5mV to 10mV output voltage ripple is typical for the first-stage design. Usually a 10-22µF capacitor is sufficient. The capacitor (COUT) of the first stage must be smaller than the bypassing capacitor (C1) of the second stage to ensure system stability.

Once the first-stage capacitor is determined and the specified output voltage ripple (at a given frequency) is given, the required attenuation of the second-stage LC filter can be determined as:

Using phasor analysis, the amplitude of the gain of the LC filter is determined as:

Note that the impedance of the damping branch, which consists a large series resistor, is much larger than the bypassing branch at the switching frequency. Thus, the filter shown in Figure 5 is approximated as a second-order RLC filter.

The cut-off frequency of the filter is determined as:

Once the filtering inductor is selected, its DCR can be extracted from the datasheet. The second-stage LC filter, which is a second-order filter, provides 40db per decade roll-off after the cutoff frequency. The attenuation at given frequency can be estimated as:

Using the attenuation calculated in Equation (5), the required cut-off frequency is determined as:

Subsequently, the required bypassing capacitance (C1) is determined as: 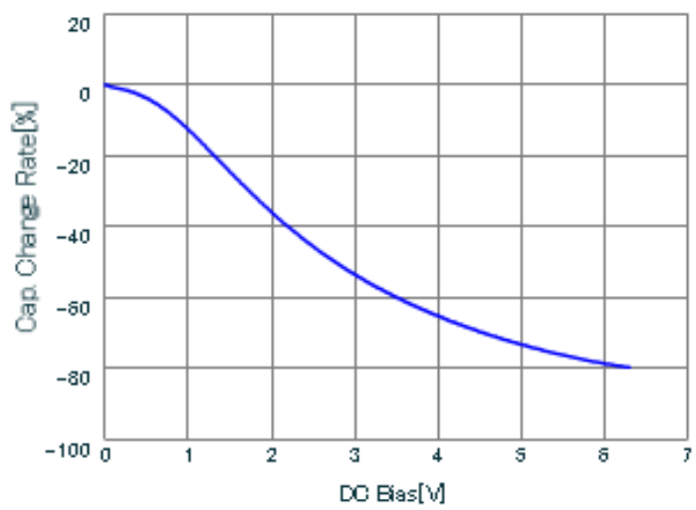 The filtering inductor usually includes a parasitic DC resistance in series with the inductor. This DCR provides damping to the network. However, to provide enough damping for a series RLC circuit, the series resistance must satisfy

. In most cases, the DCR alone cannot provide sufficient damping. To this end, an RC damping network is inserted in parallel with the bypassing capacitors to damp the resonant circuit along with the series DCR resistor. 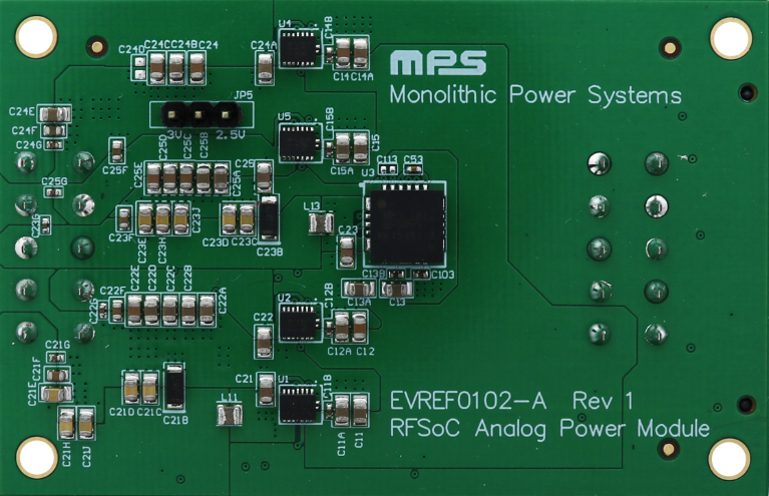 The EVREF0102A employs five high-efficiency, step-down, switch-mode power modules with integrated inductors. The MPM3833C is a 6V, 3A, ultra-small step-down power module, and the MPM3683-7 is a 16V, 8A power module. Both power modules feature integrated protection functions including OCP, OVP, UVP, and OTP. Compared to the traditional LDO solution, EVREF0102A can achieve up to 80% efficiency improvement. The EVREF0102A analog power module also achieves ultra-low noise level to meet the specifications of the Xilinx high-speed data converter by leveraging the forced continuous conduction mode (CCM) operation and implementing post passive filters. CLC passive filters are utilized for the two most sensitive ADC and DAC rails and capacitive filters are utilized for the rest of power rails.

The design procedure is illustrated on the ADC_AVCC rail where the MPM3833C power module is employed to power the rail. The MPM3833C integrates a 1µH power inductor, the current ripple of the inductor at 5V input and 0.925V output is determined as 0.63A by applying Equation (1). Subsequently, the first-stage output capacitor is selected based on Equation (4) as 22µF to provide 3mV voltage ripple to the second-stage filter.

The required gain of the second stage LC filter is determined by Equation (5) as -30dB to achieve 120µV output voltage ripple at the switching frequency. Considering the size and current rating availability, a 0.24µH Murata chip inductor DFE201612E-R24 is selected with sufficient current rating. The ADC and DAC rails require ultra-low noise across the frequency range up to 15MHz. To provide attenuation with enough margin, the cut-off frequency of the second-stage filter is selected as 25kHz. Finally, the filtering capacitors are selected as 150µF. This design is conservative to provide enough margin. The cut-off frequency is selected to compensate for the high-frequency gain increase due to the parasitic inductive impedance involved in the filter loop increases at high frequency (up to 15MHz). A SP-Cap with 100mΩ ESR is selected as the damping capacitor. Since the series resistor of the SP-Cap is high enough for damping, there is no need to add an external resistor.

The FFT results of the output noise measurement of the EVREF0102A are shown in Figure 9. As shown, the peak noise at the switching frequency is reduced to 14µV. 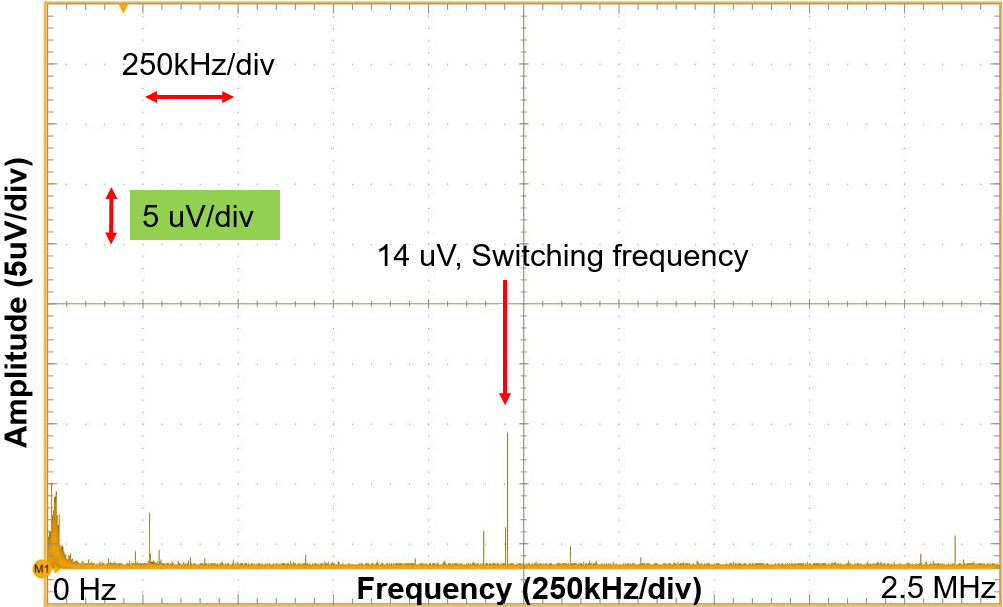 Figure 9: Output Noise Measurement of the ADC_AVCC Rail of EVREF0102

Questions answered by MPS engineers in 24h
MPM3820 footprint and EVM
Hi, In the MPM3820 datasheet it states that the NC pins must be left floating. However in the EVM3820 board layout, the NC pins are shown connected to...
DC-DC POWER CONVERTERS

1 Comment
MP8763 alternative part
On the MP8763 (NRFND) site there is a link indicating “Alternative Part”. However, I get no response on clicking that button. What alternative do ...
DC-DC POWER CONVERTERS