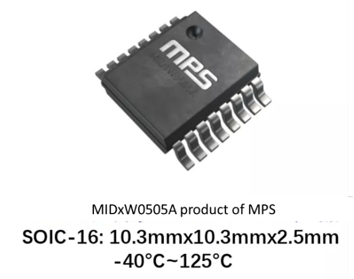 Traditional power modules are typically assembled by PCBs, capacitors, resistors, transformers, and ICs, and then encased in plastic shells. MPS uses a chip-level SOIC-16 package that is convenient for soldering, significantly reduces board space, improves reliability, and provides excellent performance.

This article will explore the advantages of the MID06W0505A-3. 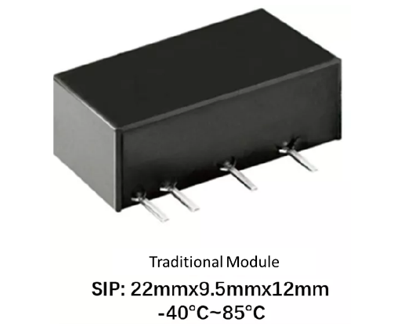 With a traditional module, the potting glue is prone to aging because air bubbles can be mixed in during the potting process. Bubbles can be removed by placing the module in a box with a low atmospheric pressure to release the mixed air, but there is still a margin for error, so aging can still occur. This can lead to potting glue cracks and shell bulging. Even if most of the bubbles are extracted, the internal bubbles repeatedly expand and shrink during use, which also ages the potting glue. Aged potting glue significantly impacts the device by reducing the module’s reliability. It can also lead to primary and secondary insulation failures, which can be dangerous for users.

In addition, traditional power modules generally operate in a narrow -40°C to +85°C temperature range. The plug-in package is easily deformed, the pins are not able to achieve automatic welding, and the efficiency is low. Traditional modules can also be difficult to implement in space-constrained applications due to their height.

The MID06W0505A-3 addresses the shortcomings of traditional power modules with the following features:

When a product is exposed to a strong magnetic field, it can experience communication anomalies or even be burnt. These issues are often due to radiated or conducted magnetic interference.

Figure 3 shows an experiment in which magnets were placed above a module to create interference. 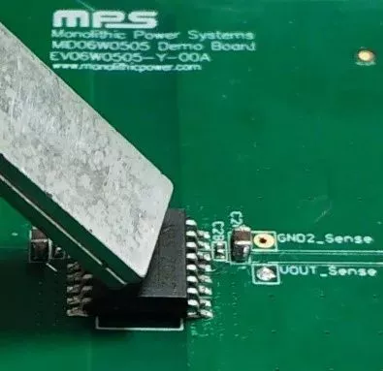 Figure 4 shows the stable output of the MID06W0505A-3 while a magnet is above the power module.

These results contrast with traditional power modules, which can experience severe oscillations. For a traditional solution, a 5V output could overshoot to 7.8V, which could damage sensitive circuitry that is downstream from the power module (see Figure 5). 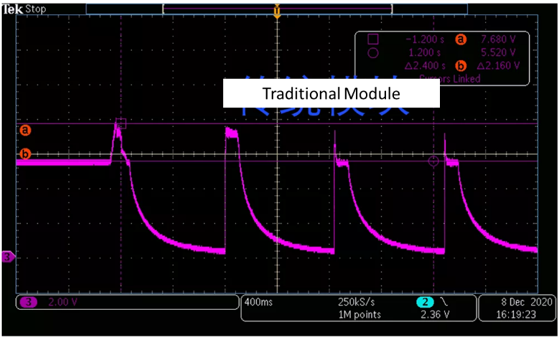 Figure 5: Output of a Traditional Module

The abnormal output is due to open-loop control. When subjected to external interference, the module’s internal circuit cannot be adjusted by close-loop regulation, and the output voltage (VOUT) fails to regulate. The MID06W0505A-3 uses advanced isolation feedback technology to provide real-time feedback on the external interference, which achieves closed-loop control and stabilizes VOUT.

In some cases with more stringent requirements for voltage regulation, a traditional power supply module has an unregulated VOUT that fluctuates significantly with the input voltage (VIN) and load. In particular, when VIN is at a maximum and there is no load, VOUT fluctuates and rises to a substantial level. In this scenario, it is recommended to connect a dummy load at 10% of the rated load. 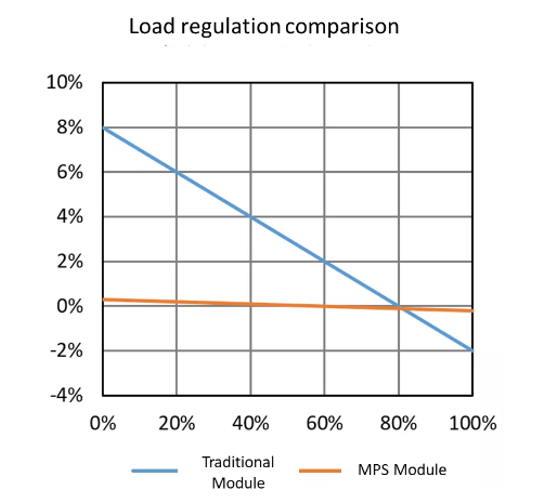 The MID06W0505A-3 is evidently more robust than traditional modules. Its unique features and leading performance indicators include:

Figure 8 shows the concise peripheral circuit of the MID06W0505A-3.

MPS is committed to introducing isolated power modules that meet the growing demands for safety, power density, and reliability. In this article, we discussed how the MID06W0505A-3 overcomes the limitations of traditional power modules, in addition to addressing challenges such as magnetic interference and fluctuating VOUT. These are all key considerations for powering various signal isolator and industry applications.