Voltage and power levels that were previously reserved for specific, high-power applications are becoming more and more commonplace in day-to-day applications, which means that previously forgiven performance issues are now unacceptable. The main limitation for these applications has traditionally been power switching technology — specifically, the performance limitations of silicon semiconductors. Recently, wide-bandgap (WBG) semiconductors have started to solve this issue, enabling high-voltage, high-frequency power converter designs.

However, the combination of high power and fast operation has created a new set of issues that designers must face when designing their converters. One of the main issues — which will be discussed in this article — is the dangers of unwanted coupling between the high voltages in the power conversion block and the weak, small-signal circuitry of the control block.

The Need for Isolated Gate Drivers

Gate drivers are common elements in most power converters. Since the control circuitry operates at low voltages, controllers cannot provide sufficient power to quickly and securely open or close the power switch. As a result, the signals from the controller are sent to the gate driver, which can withstand much higher power and can drive the MOSFET’s gate as needed.

When working in high-power or high-voltage applications, the elements in the circuit are subject to large voltage shifts and high currents. If there is a current leak from the power MOSFET to the control circuitry, the high voltages and currents involved in the power conversion circuit could easily cause a massive breakdown of the control circuit by frying the transistors. In addition, high-power applications require isolation between the input and output to protect both the user and any other devices connected downstream from the converter.

Isolation can be implemented using a variety of mechanisms and materials, each with its own set of advantages. However, the most commonly used method today for high-performance systems is capacitive coupling, because it takes up much less space than inductive isolation, is more reliable than optocouplers, and offers unrivaled isolation capacity. Figure 1 shows an isolated driver.

Capacitive isolators are based on two capacitors connected in series. These capacitors are built on the silicon die and use silicon oxide as a dielectric. By building these capacitors with a thick dielectric, they can withstand very high voltage peaks without breaking down. The isolator works by modulating the PWM signals coming from the controller into high-frequency signals, and then generating a differential voltage pair to send this information across the capacitors. This way, the modulated signal can pass through the isolation barrier without losing any data. After passing the barrier, the signals are demodulated before interacting with the driver circuit.

The main benefit of capacitive isolation is that the entire isolated driver can be easily integrated into a single chip. This is because the capacitors are built using the same standard microelectronic processes as the rest of the driver components. It is even possible to implement ICs with drivers for both the high-side and low-side power switches, such as the MP18831, an isolated half-bridge gate driver.

One of the key parameters for isolated gate drivers is its isolation voltage rating. Having the right isolation rating is crucial for protecting the user from potentially harmful current discharges, as it aims to avoid unexpected voltage transients from destroying other circuits connected to the supply. In addition, this rating can maintain signals within the converter free from the interferences caused by noise or unexpected common-mode voltage transients.

However, due to increased voltages and frequencies, gate drivers face high-amplitude voltage shifts with very large slew rates. If these voltage transients are fast enough, certain high-frequency components in the voltage may not be blocked by traditional isolation methods. Common-mode transient isolation (CMTI) protects the circuit by stopping these high-frequency voltage components from coupling past the isolation barrier.

As bus voltages and switching frequencies continue to increase, CMTI is becoming more and more important in gate drivers. If the CMTI is not sufficiently high, the high-power noise could be coupled across the isolated gate driver, generating a current loop and causing charge to appear at the switch gate. If this charge is large enough, it could cause the gate driver to misinterpret this noise for a driving signal, causing a severe circuit malfunction due to shoot-through. Figure 2 shows how charge can be coupled across the isolation barrier due to insufficient CMTI.

Figure 2: Charge Coupling through the Driver Due to Insufficient CMTI

Parasitic coupling past the isolation barrier may not be the only cause of shoot-through. Voltage from the switch node may also be coupled to the transistor’s gate via parasitic coupling within the transistor itself. This coupling usually occurs through the MOSFET’s equivalent parasitic capacitor, called the Miller capacitor. However, the Miller capacitor can cause serious problems during high-frequency, high-voltage switching.

Due to the natural high-pass behavior of capacitors, high-frequency voltages are coupled through the Miller capacitor, bypassing the isolation barrier between the MOSFET’s gate and channel.

This means that a current flows across the gate node, charging the gate and potentially triggering the switch. If this occurs, a direct path is established between the bus voltage and GND, causing shoot-through current and a loss in converter efficiency. 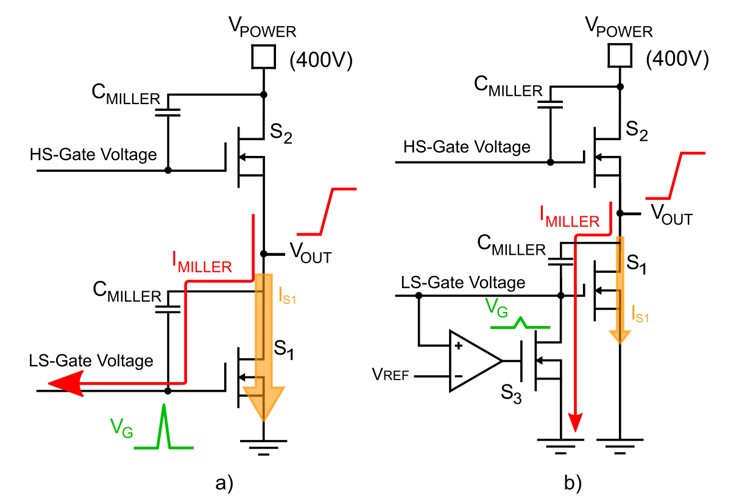 This charge accumulation at the gate can also cause other issues, such as desaturation. Desaturation is the process of a MOSFET involuntarily entering the nonlinear region. This operation region is highly inefficient, and is therefore never used for power conversion. Due to the increased power dissipation, not only will the system lose efficiency, it may even lead to the switches being destroyed. To avoid this, the DESAT protection circuit senses the voltage across the switch and stops powering the gate if it surpasses the desaturation threshold (see Figure 5).

The increased switching frequency brought about by the introduction of WBG semiconductors paired with increased power requirements has made isolation a key factor in power converter design. High isolation and CMTI ratings are key to ensure that users and devices connected to the power supply are not harmed by accidental current leakage. Protections features such as desaturation protection and active Miller clamps keep the MOSFETs operating safely.

MPS offers a wide variety of isolated gate drivers such as the MP18831, a dual-channel driver specifically designed for half-bridge converter topologies with configurable dead-time control. To learn more about our isolated power products, visit the Isolation product category page.