Automotive power systems operate under exceptionally harsh conditions. In particular, the car battery must handle numerous loads, and it can be challenging to determine the state of these loads simultaneously. Designers must consider the possible impact of the various pulses generated by the power line when these loads are under different operating conditions and potential fault states.

Figure 1 shows the various types of pulses that may appear on the power line in different application scenarios. For example, if the high-power load suddenly turns off, then the battery voltage can overshoot; if the high-power load suddenly starts up, then the battery voltage drops. When the inductive wiring harness is suddenly loosened, the load has a negative voltage pulse. Meanwhile the AC ripple is superimposed on the battery when the generator operates. When using jumper wires, the backup battery may be applied incorrectly, which causes reverse polarity. This reverse polarity can remain for a significant period of time.

To handle the various pulse interferences that may exist on these automotive power lines, industry associations and major vehicle manufacturers have developed relevant test standards to simulate power line transient pulses. These standards include the ISO 7637-2 and ISO 16750-2, as well as the test standards for Mercedes-Benz and Volkswagen. As the most front-end circuit of the module, the reverse polarity protection circuit must also meet industry test standards.

There are three basic types of reverse polarity protection circuits, described below.

This circuit is typically used for low-current applications between 2A and 3A. Advantages include simplicity and lower cost, but there is greater power loss.

P-Channel MOSFET on the High Side

For applications with currents exceeding 3A, a P-channel MOSFET can be placed on the high side. This driving circuit is relatively simple, though it is more expensive due to the P-channel MOSFET.

When the power supply is connected positively, the P-channel MOSFET is open. The channel voltage experiences a small drop, then the temperature rises and the overall power loss is reduced.

When the power supply is connected in the reverse direction, the P-channel MOSFET is closed, and the parasitic body diode accomplishes the reverse polarity protection function.

N-Channel MOSFET on the Low Side

Another circuit requires placing an N-channel MOSFET on the low side. The simplified gate drive circuit uses a cost-effective N-channel MOSFET. This circuit functions similarly to a P-channel MOSFET that has been placed on the high side; however, the reverse polarity protection structure of this system means that the power supply ground and load ground are separated. This structure is rarely used when designing electronic automotive products.

Figure 2 shows a summary of these reverse polarity protection circuits.

This article will focus on the P-channel MOSFET reverse polarity protection circuit.

The basic P-channel MOSFET reverse polarity protection circuit has two disadvantages: a large system standby current and backflow current. These are described in greater detail below.

R should not be too large. The ordinary Zener diode is at the mA level. If the current-limiting resistance is too large, the Zener diode cannot reliably turn on, and its clamping performance is significantly reduced. This leads to an over-voltage risk on VGS. On the other hand, a larger R corresponds with a smaller P-channel MOSFET drive current, which results in slower opening/closing processes. If the input voltage (VIN) fluctuates, then the P-channel MOSFET may operate in the linear region (in which the MOSFET is not fully turned on) for a long time. The resulting higher resistance can lead to overheating. 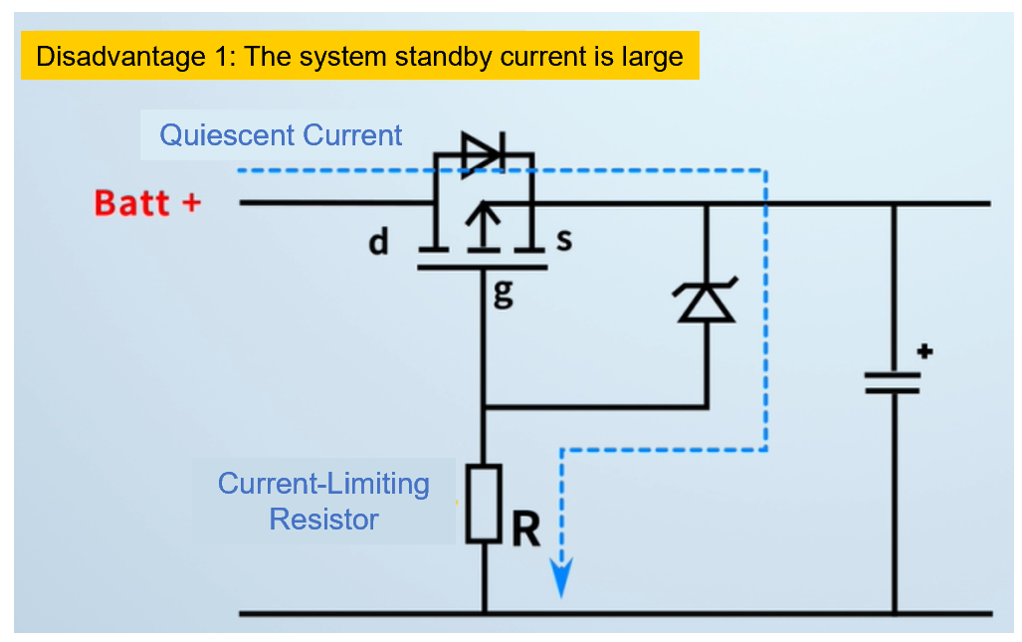 While performing an input power supply drop test for ISO 16750, the P-channel MOSFET stays open while VIN drops. In this situation, the system capacitor’s voltage reverses the power supply, which can result in system power failure and trigger an interrupt function. During the superimposed AC input voltage test, current backflow occurs since the P-channel MOSFET is completely open. This can force the electrolytic capacitor to repeatedly charge and discharge, which can cause overheating.

Questions answered by MPS engineers in 24h
MPQ6610-AEC1 flyback diode
Hello, does MPQ6610-AEC1 needs a flyback diode for protection or it’s built inside the chip ? We are using it to drive some solenoids at 1,3 A / 24V...
AUTOMOTIVE SOLUTIONS

1 Comment
Usb C source and sink power with MPQ4228-C-AEC1
Hi, I am looking for advice on this chip. The mcu circuit needs to supply power to a cell phone when it has external power and be powered by the phone...
AUTOMOTIVE SOLUTIONS