Why Isolation and Types of Isolation

The “isolation” mentioned in this article also refers to galvanic isolation, which is used to isolate functional sections of electrical systems to prevent direct current from flowing between them. For power supplies where the input end may be a hazardous high voltage, the input must be galvanic isolated from the control end or output end (which may include a human-accessible terminal) with enough safety distance. If any failure occurs on the control end, the isolation barriers prevent the high voltage from reaching users and cause catastrophic results. A more detailed introduction to galvanic isolation can be found in Reference 1.

For example, as in electric vehicles, the high-voltage battery that powers the drivetrain is isolated from the low-voltage electronics by various isolated links across all sub-systems. As another example, AC/DC battery chargers are required by UL to offer isolation protection, as the output is typically user-accessible. However, IoT devices may not require isolation from AC, as the AC/DC portion of such device has no direct contact with the end users during normal operation.

A galvanic isolation barrier is based on either optical, magnetic, or capacitive isolation (see Figure 1)2,3. Optical technology is light-emitting diode (LED)-based and is widely used in AC/DC conversion for output feedback. However, the reliability of optocouplers can degrade as these devices suffer from aging, temperature drift, and varying current gain issues. Sometimes, a second optocoupler is required for additional over-voltage protection (OVP) and takes up quite a bit of PCB space. It is easy to see how much space two big optocouplers take up on a small 5W Apple adaptor in Reference 44.

The Key Benefits for Capacitive Isolation in Adaptors

The first benefit of capacitive isolation in adaptors is full secondary control of flyback converters.

For USB power delivery quick chargers, manufacturers are expected to add much higher power to their existing adaptor portfolio, but still within a reasonably small size. This requires high-frequency flyback controllers, secondary synchronous rectifiers, and high efficiency5. The challenge here is maintaining good communication from the primary side to the secondary side at a high frequency to prevent them from turning on at same time and causing severe problems. Capacitive isolation offers an easy solution to this. If the flyback control is generated at the secondary side, the controller can sense the turn-off of the synchronous rectifier (SR) and turn on the flyback quickly through the capacitive isolation link. Since the propagation delay from the secondary side to the primary side is very short, it offers safe operation and high-frequency operation potential. Therefore, users have a truly foolproof SR solution where a complete operation is integrated into a single IC compared to the difficult design of separate primary and secondary controllers normally required in optocoupler-based flyback power supplies.

The third benefit of capacitive isolation is the small bill of materials (BOM). Since capacitive coupling can be integrated inside the IC, adaptors can replace flyback controllers, SR controllers, optocouplers and the resistors/capacitors needed in a single IC solution (see Figure 2). This all-in-one capacitive coupled flyback IC may reduce the USB PD adaptor BOM by ~50%. 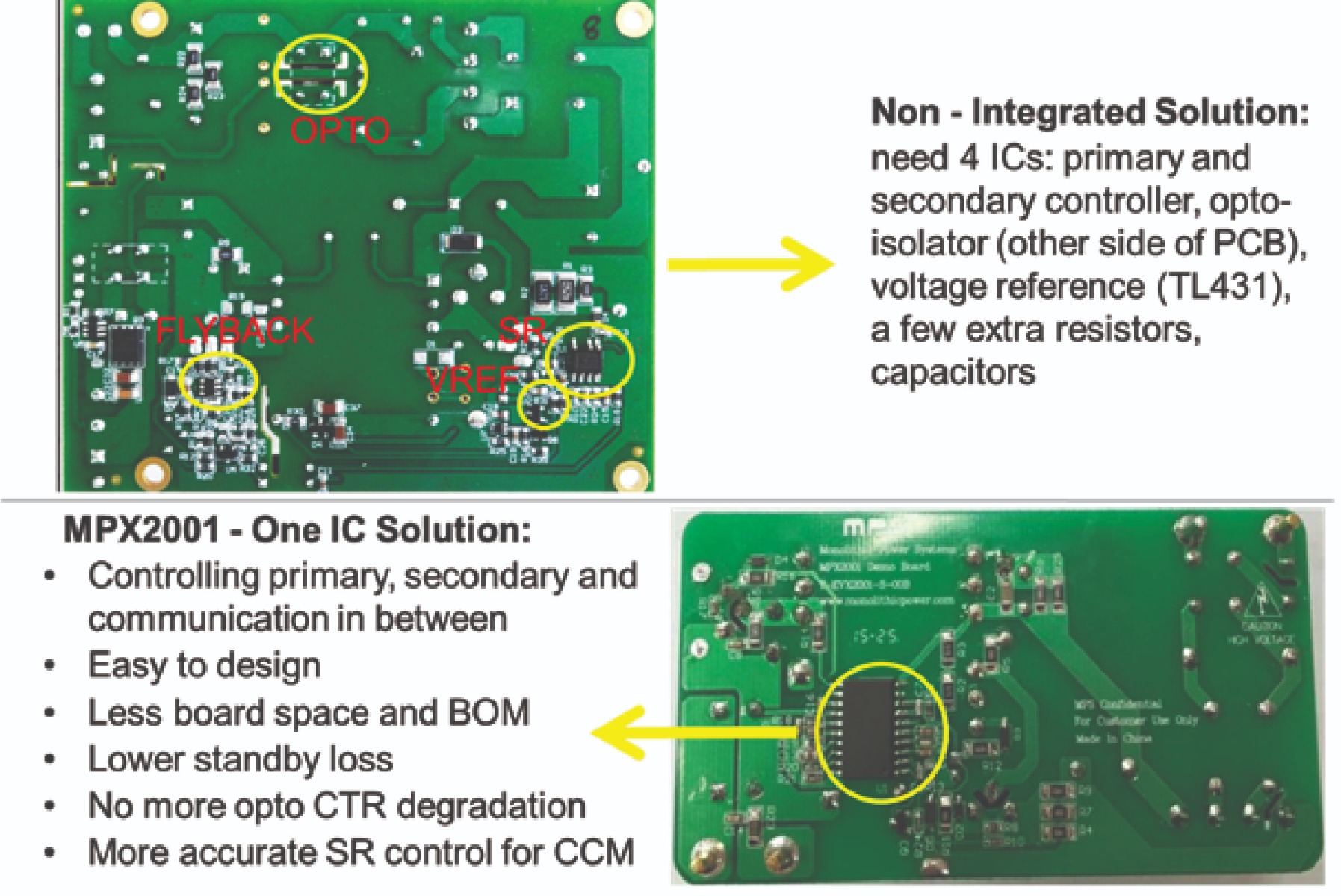 The fourth benefit of capacitive isolation is its potential to support soft switching. In the past, soft switching, such as ZVS or active clamp, was very difficult to achieve without the communication from the secondary to primary side. However, with capacitive coupling, the parasitic capacitances of various switches can be discharged easily with perfect timing to achieve soft switching, offering much higher efficiency and reliability with accurate control.

The MPX2001 from Monolithic Power Systems (MPS) is the first released IC that integrates capacitive coupling for flyback converter control. The MPX2001 integrates a primary driving circuit, capacitive isolation, and synchronous rectification driver all in one chip (see Figure 3).

Some key features of this IC include:

Figure 4 shows a certified 45W USB PD adaptor created based on the MPX2001 and Cypress CCG3PA USB PD protocol IC. The board shown has an obviously simpler BOM compared to past solutions.

Additionally, since capacitive coupling allows for secondary control of flyback controllers as an all-in-one solution, this opens a great deal of opportunities for future chipsets. For example, USB PD control is handled by a secondary-side PD protocol communication IC. This can be fully integrated with an all-in-one solution to achieve lower standby power, smaller board size, and an overall smaller BOM.

As another example, many commercial LED lighting fixtures are controlled by 0-10V analog dimmers or digital PWM dimmers8. Both dimmers control the LED power supply at the secondary side by means of a small isolation transformer and more than 10 external components. These also have the potential to be integrated onto the secondary control side and become an all-in-one solution for LED lighting.

Furthermore, digital power control prevails in high-end power supply designs, many for server power, where MCU/DSP are used on primary and secondary sides with capacitive isolated drivers and communication. Such solutions require high initial investment, high overall cost, and long development cycles. With capacitive isolation now available in analog chipsets, the advantage for digital control can be applied in the future across many more applications that are more cost-sensitive.

This article introduced why is capacitive isolation a better overall isolation technology, how capacitive isolation can be applied for AC/DC conversion, and how secondary control can offer many potential advantages in future AC/DC power conversion designs. The MPX2001 from MPS is an ideal all-in-one solution for integrating capacitive coupling for flyback converter control. For more detailed flyback controller, SR controller, and other AC/DC IC information from MPS, please visit www.monolithicpower.com or contact your local MPS sales office.

7 Comments
AC/DC Inductor less desing for 2W at about 10VDC
I am looking for part recommendation for AC/DC for a 2Watt load. I need to be able to operate at 120C in a sealed enclosure. I can use walls of heat s...
AC-DC POWER CONVERTERS

4 Comments
Voltage sags with MP172A
I am attempting to recreate the EV172A-S-00A circuit which uses MP172A to get an output of 5V, 120mA. The changes I made to the reference design for m...
AC-DC POWER CONVERTERS