Brushless Vs Brushed DC Motors: When and Why to Choose One Over the Other

Many motion control applications use permanent magnet DC motors. Since it is easier to implement control systems using DC motors compared to AC motors, they are often used when speed, torque, or position needs to be controlled.

There are two types of commonly used DC motors: Brushed motors, and brushless motors (or BLDC motors). As their names imply, DC brushed motors have brushes, which are used to commutate the motor to cause it to spin. Brushless motors replace the mechanical commutation function with electronic control.

In many applications, either a brushed or brushless DC motor can be used. They function based on the same principles of attraction and repulsion between coils and permanent magnets. Both have advantages and disadvantages that may cause you to choose one over the other, depending on your application’s requirements. 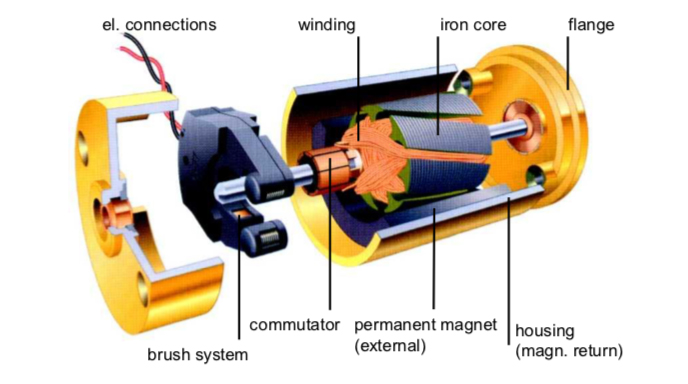 DC motors use wound coils of wire to create a magnetic field. In a brushed motor, these coils are free to rotate to drive a shaft – they are the part of the motor that’s called the “rotor”. Usually the coils are wound around an iron core, though there are also brushed motors that are “coreless”, where the winding is self-supported.

The fixed part of the motor is called the “stator”. Permanent magnets are used to provide a stationary magnetic field. Normally these magnets are positioned on the inner surface of the stator, outside of the rotor.

In order to create torque, which makes the rotor spin, the magnetic field of the rotor needs to continuously rotate, so that it’s field attracts and repels the fixed field of the stator. To make the field rotate, a sliding electrical switch is used. The switch consists of the commutator, which is typically a segmented contact mounted to the rotor, and fixed brushes which are mounted to the stator. 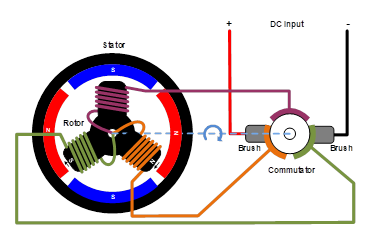 As the rotor turns, different sets of rotor windings are constantly switched on and off by the commutator. This causes the coils of the rotor to be constantly attracted and repelled from the stator’s fixed magnets, which makes the rotor spin.

Since there is some mechanical friction between the brushes and commutator – and since it is an electrical contact, it generally cannot be lubricated – there is mechanical wear of the brushes and commutator over the lifetime of the motor. This wear will eventually reach a point where the motor no longer functions. Many brushed motors – especially large ones – have replaceable brushes, typically made of carbon, which are designed to maintain good contact as the wear. These motors require periodic maintenance. Even with replaceable brushes, eventually the commutator also wears to the point that the motor must be replaced.

To drive a brushed motor, DC voltage is applied across the brushes, which passes current through the rotor windings to make the motor spin.

In cases where rotation is only needed in one direction, and speed or torque doesn’t need to be controlled, no drive electronics at all are required for a brushed motor. In applications like this, the DC voltage is simply switched on and off to make the motor run or stop. This is typical in low cost applications like motorized toys. If reversal is needed, it can be accomplished by using a double pole switch.

To facilitate control of speed, torque, and direction, an “H-bridge” composed of electronic switches - transistors, IGBTs, or MOSFETs - is used to allow the motor to be driven in either direction. This allows the voltage to be applied to the motor in either polarity, which makes the motor rotate in opposite directions. The motor speed or torque can be controlled by pulse width modulating one of the switches. 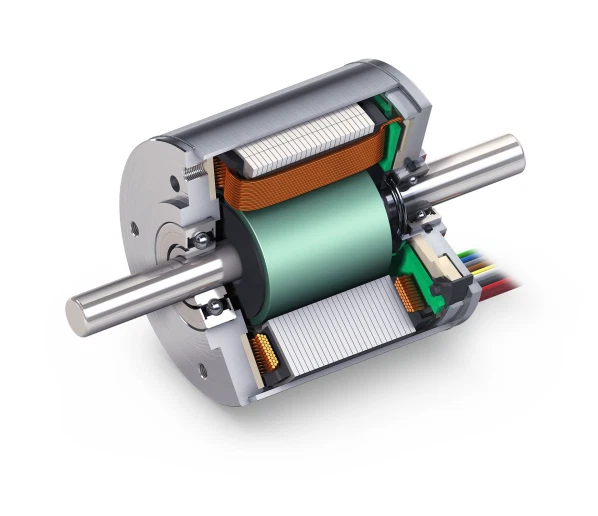 Brushless DC motors operate on the same principle of magnetic attraction and repulsion as brush motors, but they are constructed somewhat differently. Instead of a mechanical commutator and brushes, the magnetic field of the stator is rotated by using electronic commutation. This requires the use of active control electronics.

The three windings of a brushless motor are connected in either a “star” or a “delta” configuration. In either case, there are three wires connecting to the motor, and the drive technique and waveform is identical.

With three phases, motors can be constructed with different magnetic configurations, called poles. The simplest 3-phase motors have two poles: the rotor has only one pair of magnetic poles, one North and one South. Motors can also be built with more poles, which requires more magnetic sections in the rotor, and more windings in the stator. Higher pole counts can provide higher performance, though very high speeds are better accomplished with lower pole counts.

To drive a three phase brushless motor, each of the three phases needs to be able to be driven to either the input supply voltage or ground. To accomplish this, three “half bridge” drive circuits are used, each consisting of two switches. The switches can be bipolar transistors, IGBTs, or MOSFETs, depending on the voltage and current required.

There are a number of drive techniques that can be employed for three phase brushless motors. The simplest is called trapezoidal, block, or 120-degree commutation. Trapezoidal commutation is somewhat similar to the commutation method used in a DC brush motor. In this scheme, at any given time, one of the three phases is connected to ground, one is left open, and the other is driven to the supply voltage. If speed or torque control is needed, usually the phase connected to the supply is pulse width modulated. Since the phases are switched abruptly at each commutation point, while the rotor rotation is constant, there is some variation of torque (called torque ripple) as the motor rotates.

For higher performance, other commutation methods can be used. Sine, or 180-degree, commutation drives current thorough all three motor phases all of the time. The drive electronics generates a sinusoidal current though each phase, each shifted 120 degrees from the other. This drive technique minimizes torque ripple, as well as acoustic noise and vibration, and is often used for high performance or high efficiency drives.

To properly rotate the field, the control electronics need to know the physical position of the magnets on the rotor relative to the stator. Often, the position information is obtained using Hall sensors that are mounted to the stator. As the magnetic rotor turns, the Hall sensors pick up the magnetic field of the rotor. This information is used by the drive electronics to pass current through the stator windings in a sequence that causes the rotor to spin. 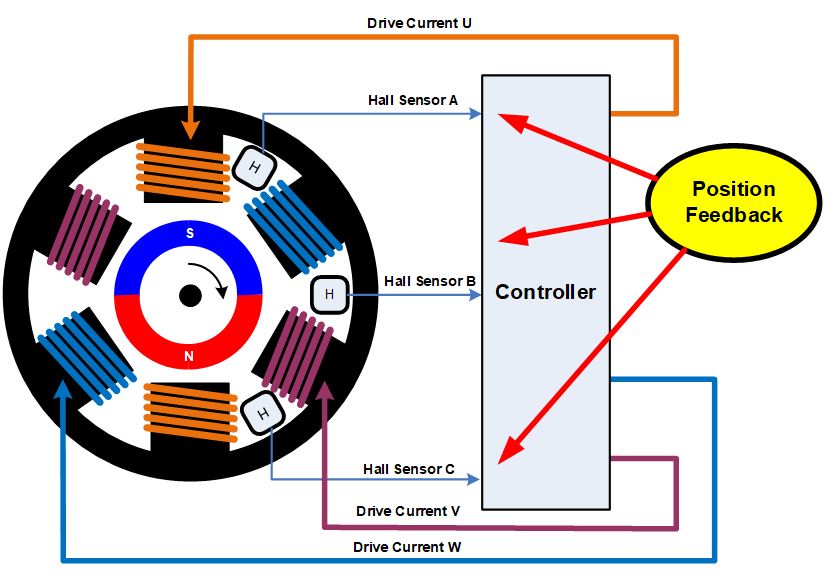 In addition to providing position feedback using Hall sensors, there are various methods that can be used to determine the rotor position without sensors. The simplest is to monitor the back EMF on an undriven phase to sense the magnetic field relative to the stator. A more sophisticated control algorithm, called Field Oriented Control or FOC, calculates the position based on rotor currents and other parameters. FOC typically requires a fairly powerful processor, as there are many calculations that have to be performed very quickly. This, of course, is costlier than a simple trapezoidal control method.

Depending on your application, there are reasons why you might choose to use a brushless motor over a brushed motor. The following table summarizes the main advantages and disadvantages of each motor type:

As previously mentioned, one of the disadvantages of brushed motors is that there is mechanical wear of the brushes and commutator. Carbon brushes in particular are sacrificial, and in many motors they are designed to be replaced periodically as part of a maintenance program. The soft copper of the commutator is also slowly worn away by the brushes, and eventually reach a point where the motor will no longer operate. Since brushless motors have no moving contacts, they do not suffer from this wear.

Brushed motors rotational speed can be limited by the brushes and commutator, as well as the mass of the rotor. At very high speeds, the brush to commutator contact can become erratic, and brush arcing increases. Most brushed motors also use a core of laminated iron in the rotor, which gives them large rotational inertia. This limits the acceleration and deceleration rates of the motor. It is possible to build a brushless motor with very powerful rare earth magnets on the rotor, which minimizes the rotational inertia. Of course, that increases the cost.

The brushes and commutator form a kind of electrical switch. As the motor turns, the switches are being opened and closed, while significant current is flowing through the rotor windings, which are inductive. This results in arcing at the contacts. This generates a large amount of electrical noise, which can get coupled into sensitive circuits. Arcing can be somewhat mitigated by adding capacitors or RC snubbers across the brushes, but the instantaneous switching of the commutator always generates some electrical noise.

Brushed motors are “hard switched” – that is, current is abruptly moved from one winding to another. The torque generated varies over the rotation of the rotor as the windings get switched on and off. With a brushless motor, it is possible to control the winding currents in a way that gradually transitions current from one winding to another. This lowers torque ripple, which is a mechanical pulsation of energy onto the rotor. Torque ripple causes vibration and mechanical noise, especially at low rotor speeds.

Due to declining costs and better performance, brushless motors are gaining in popularity in many applications. But there are still places where brushed motors make more sense.

Much can be learned by looking at the adoption of brushless motors in automobiles. As of 2020, most motors that are running whenever the car is running – things like pumps and fans – have moved from brushed motors to brushless motors for their increased reliability. The added cost of the motor and electronics more than makes up for the lower rate of field failures and decreased maintenance requirements.

As the cost of brushless motors and their associated electronics continues to decrease, brushless motors are finding their way into applications that have traditionally been held by brushed motors. As another example from the automotive world, seat adjustment motors in high end card have been adopting brushless motors because they generate less acoustic noise.

Questions answered by MPS engineers in 24h
MA730 current capacity
Hello, We are using MA730. We want to know what is output current capacity for ABZ signals. Thanks.
MOTOR DRIVERS/SENSORS

2 Comments
MP6536 current sense resistors
Hi, i have a question about the connections of LS1, LS2 and LS3. In the evaluation board you connected to each pin a shunt resistor and then you filte...
MOTOR DRIVERS/SENSORS

2 Comments
Mp6543hb - faults
Good Morning, I have some questions concerning the faults that may occur during the operations of the driver MP6543HB (Hall sensors inputs). We have p...
MOTOR DRIVERS/SENSORS