The design requirements of today’s switching power supplies are driven by efficiency requirements not only at full load, but also under sleep mode or no-load conditions when the cable is disconnected. Power system integrators have to meet new regulations from agencies such as Energy Star, 80 Plus, and the European Commission’s CoC, regardless of the power supply’s load condition.

To meet these requirements, power supplies must reduce the switching frequencies below 20kHz, occasionally as low as a few kHz. Because the human ear can hear sound frequencies below 20kHz (and is most sensitive between 2kHz and 5kHz), audible noise is difficult to miss and can be extremely annoying. This is especially true for consumer applications such as phone or laptop chargers, or LED drivers that can be found in every living room.

Power supply components most susceptible to audible noise are usually MLC ceramic capacitors, inductors, or transformers. Magnetic components, such as inductors and transformers, are stressed by high-voltage pulses at frequencies that result in a physical effect, such as the reverse piezoelectric effect on the coil or magnetostriction on the core.

The reverse piezoelectric effect and magnetostriction are mechanisms that convert the applied electrical energy into mechanical force. This mechanical force causes the coil or core to vibrate, which displaces the air around it and manifests as sound waves. As a result, the mechanical self-resonant frequency (SRF) of these power supply components must be addressed, since these vibrations are amplified many times at the resonant frequency.

First, measure the mechanical SRF to see if it falls within the audible noise range. If it does, identify factors that contribute to this resonance. Lastly, choose electrical parameters during the design stage that limit the range of switching frequencies. By avoiding the mechanical SRF, noise can be more easily mitigated.

Mechanical self-resonance has been studied, and there are models to identify and define the controls that can be used. One particular model is Hooke’s law. Figure 1 shows equations for a spring mass system. This system is similar to the helical coil of an inductor and the mass of the PCB assembly that the magnetic component is soldered onto. 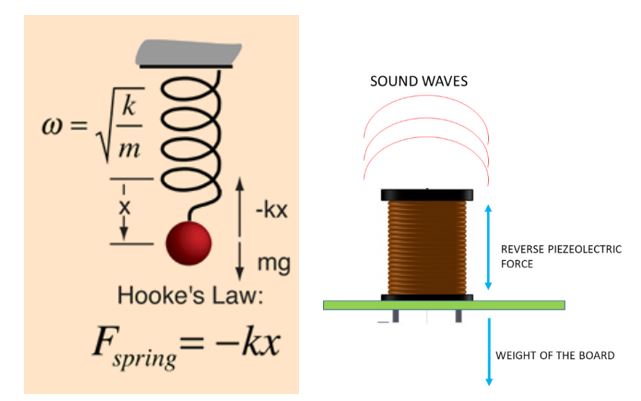 The mass of the red ball (m) is the same as the mass of the PCB assembly. The displacement (x) is caused by the force of either the reverse piezoelectric effect or magnetostriction. The relationship between the force applied and the weight of the board is best described as a second-order differential equation (see Figure 2). 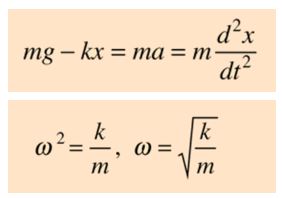 Therefore, the resonant frequency of this mass spring system can be calculated with Equation (1):

Where k is the spring’s stiffness constant, and m is the mass.

The power converter used for this experiment was MPS’s MP174A, a constant peak current regulator with adjustable frequency. With this device, the switching frequency changes proportionately with changes in load current and output power to maintain regulation..

Figure 3 shows the lab set-up to measure the audible noise generated by a drum core inductor and to find the mechanical self-resonant frequency (SRF). The spectrum analyzer app and the microphone on the phone were used to measure the sound. The phone was always placed 5cm from the inductor. The load current on the converter was varied to sweep the different switching frequencies, and the resulting sound was measured by the phone.. 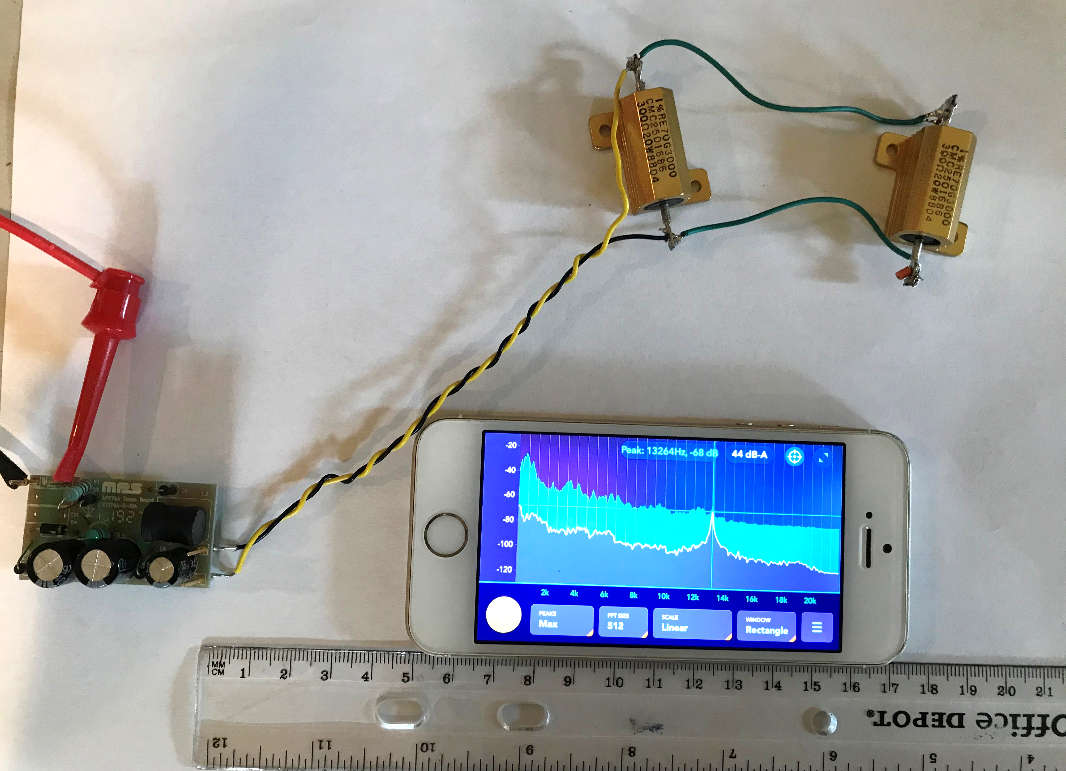 Figure 4 shows the waveform captured at one of the load currents. The 13.16kHz frequency was matched with the spectrum generated by the app that captured the peak of the sound coming from the drum core inductor at 13.242kHz ( 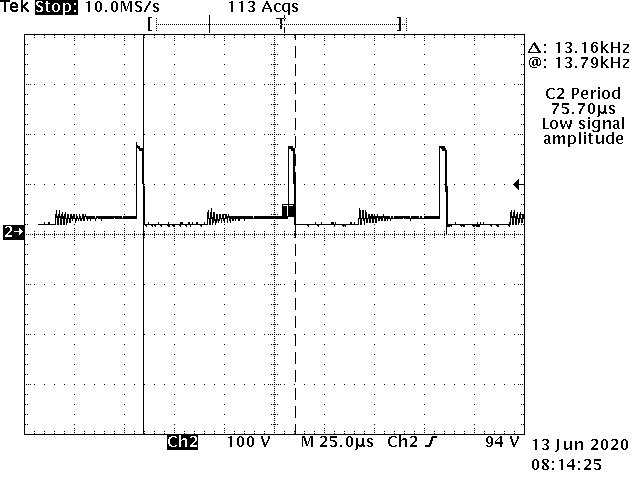 The audible noise was recorded by the microphone in the phone. Then a spectrum analysis app installed on the phone was used to plot all of the noise frequencies and their respective decibel levels (in dB), which measure the volume of the sound. 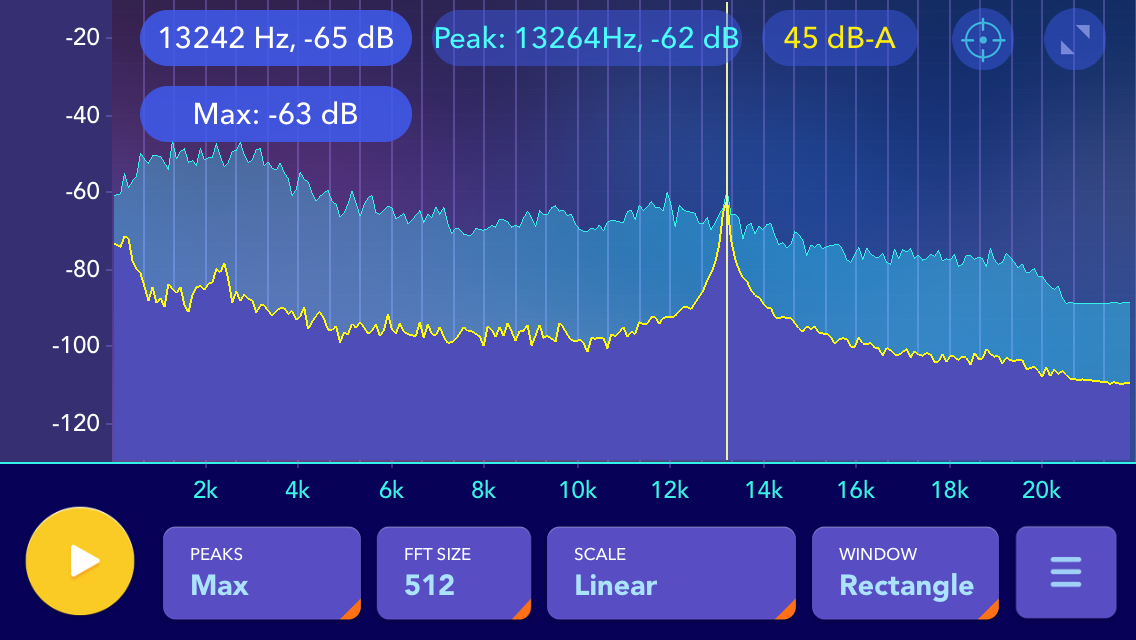 This peak shows an increase of 10dB in the noise amplitude at 1W of output power. This peak is due to the mechanical self-resonant frequency of the inductor. This noise peak can be mitigated by avoiding switching frequencies between 11kHz and 13kHz. Instead of keeping the peak current constant, as is the case for the MP174A, it can be decreased linearly, and a minimum constant switching frequency of 13kHz can be maintained to avoid the noise “peaking.” Then as the output power falls below 1W, the peak current can be held constant, and the switching frequency can linearly decrease from 11kHz to lower frequencies. 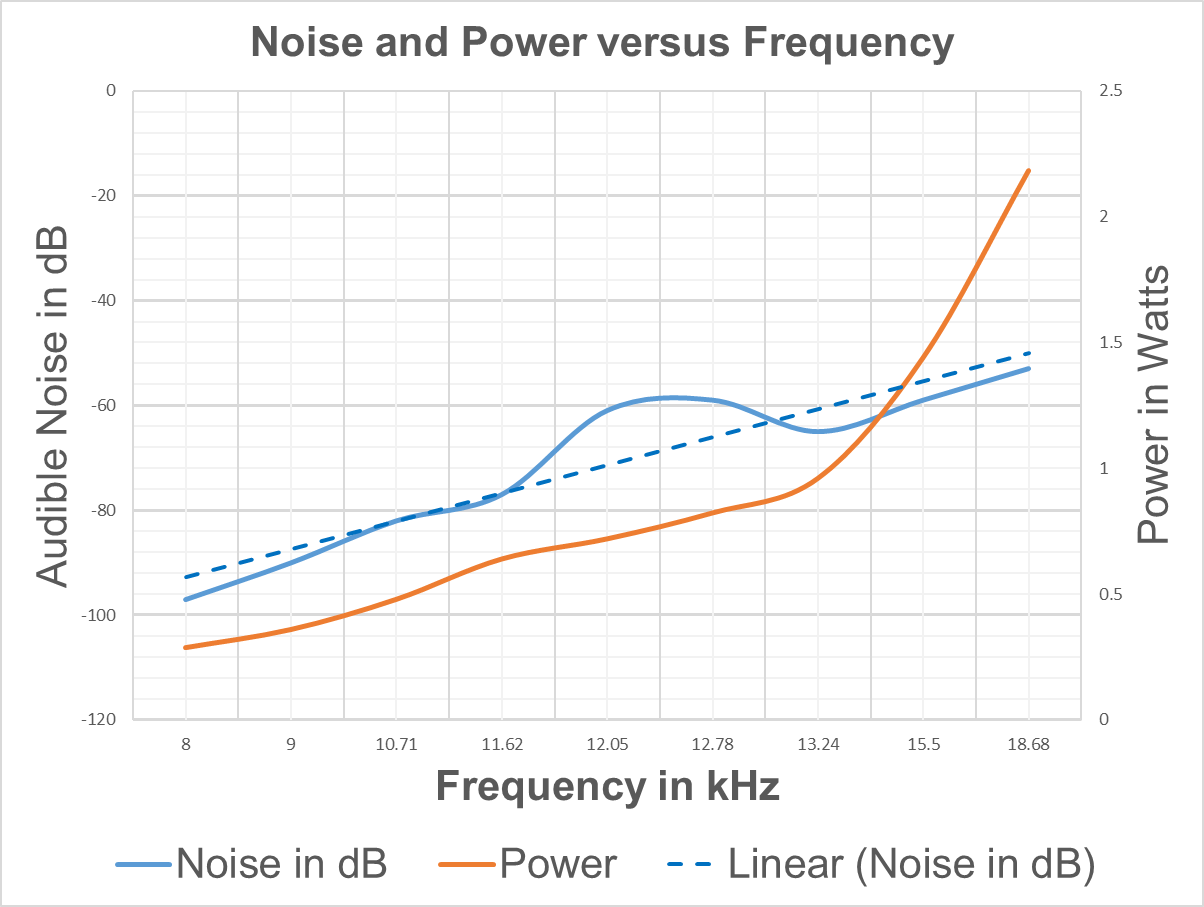 The control strategy detailed in this article can be modified to skip certain switching frequencies that fall too close to the magnetic components’ mechanical SRF. Magnetic components can be designed such that the resonant frequency exceeds 20kHz, or is much lower than the minimum switching frequency required, to remain within regulation across the full output power range. The human ear is most sensitive between 2kHz and 5kHz; changing the stiffness constant of the winding can also change the resonant frequency.

Replacing the switching regulator with a higher peak current variant may offer a different range of switching frequencies that excludes the self-resonant frequency, which could solve the audible noise problem. Changing the form of the magnetic assembly or its mechanical structure can help reduce the audible noise, since the SRF may be outside the switching frequency range for one type of mechanical structure. One such example may be a shielded core vs. an unshielded core, or even a different manufacturer for the same inductance value.

Questions answered by MPS engineers in 24h
Question about MP174A Output Regulation Improvement
Hi Prasad, Thank you very much for your answer. I try your answer. Best regard.
AC-DC POWER CONVERTERS

11 Comments
Voltage sags with MP172A
I am attempting to recreate the EV172A-S-00A circuit which uses MP172A to get an output of 5V, 120mA. The changes I made to the reference design for m...
AC-DC POWER CONVERTERS