What is a Power Supply?

A power supply is an electrical device that converts the electric current that comes in from a power source, such as the power mains, to the voltage and current values necessary for powering a load, such as a motor or electronic device.

The objective of a power supply is to power the load with the proper voltage and current. The current must be supplied in a controlled manner — and with an accurate voltage — to a wide range of loads, sometimes simultaneously, all without letting changes in the input voltage or in other connected devices affect the output.

The one thing all power supplies have in common is that they take electric power from the source at the input, transform it in some way, and deliver it to the load at the output.

The power at the input and output can be either alternating current (AC) or direct current (DC):

The first step in any power supply design is to determine the input current. And in most cases, a power grid’s input voltage source is AC.

The typical waveform for an alternating current is a sine wave (see Figure 1).`

There are several indicators that must be taken into account when working with an AC power supply:

Alternating current (AC) is the way electric power is transmitted from generating facilities to end users. It is used for power transportation because electricity needs to be transformed several times during the transportation process.

Electric generators produce voltages of about 40,000V, or 40kV. This voltage is then stepped up to anywhere between 150kV and 800kV, to reduce power losses when transporting electric current over long distances. Once it reaches its destination area, the voltage is stepped down to between 4kV and 35kV. Finally, before the current reaches individual users, it is reduced to 120V or 240V, depending on the location.

All these changes in voltage would be either complicated or very inefficient to do with direct current (DC), because linear transformers depend on voltage fluctuation to transfer and transform electrical energy, so they can only work with alternating current (AC).

A linear AC/DC power supply has a simple design.

By using a transformer, the alternating current (AC) input voltage is reduced to a value more suitable for the intended application. Then, the reduced AC voltage is rectified and turned into a direct current (DC) voltage, which is filtered in order to further improve the waveform quality (Figure 2).

Traditional linear AC/DC power supply design has evolved over the years, improving in terms of efficiency, power range, and size — but this design has some significant flaws that limit its integration.

A huge limitation in a linear AC/DC power supply is the size of the transformer. Because the input voltage is transformed at the input, the necessary transformer would have to be very large and therefore very heavy.

At low frequencies (e.g. 50Hz), large inductance values are necessary to transfer high amounts of power from the primary to secondary coil. This demands large transformer cores, which makes miniaturization of these power supplies practically impossible.

Another limitation of linear AC/DC power supplies is the high-power voltage regulation.

A linear AC/DC power supply uses linear regulators to maintain a constant voltage at the output. These linear regulators dissipate any extra energy in the form of heat. For low power, does not pose much of a problem. However, for high power, the heat that a regulator would have to dissipate to maintain a constant output voltage is very high, and would require adding extremely large heatsinks.

New design methodology has been developed to solve many of the problems associated with linear or traditional AC/DC power supply design, including transformer size and voltage regulation.

Switching power supplies are now possible thanks to the evolution of semiconductor technology, especially thanks to the creation of high-power MOSFET transistors, which can switch on and off very quickly and efficiently, even if large voltages and currents are present.

A switching AC/DC power supply enables the creation of more efficient power converters, which no longer dissipate the excess power.

In switching AC power supplies, the input voltage is no longer reduced; rather, it is rectified and filtered at the input. Then the DC voltage goes through a chopper, which converts the voltage into a high-frequency pulse train. Finally, the wave goes through another rectifier and filter, which converts it back to direct current (DC) and eliminates any remaining alternating current (AC) component that may be present before reaching the output (see Figure 3).

As could be expected, this new design method does have some drawbacks.

Switching AC/DC power converters can generate a significant amount of noise in the system, which must be treated to ensure it is not present at the output. This creates a need for more complex control circuitry, which in turn adds complexity to the design. Nevertheless, these filters are made up of components that can be easily integrated, so it does not affect the size of the power supply significantly.

Smaller transformers and increased voltage regulator efficiency in switching AC/DC power supplies are the reason why we can now convert a 220V¬RMS AC voltage to a 5V DC voltage with a power converter that can fit in the palm of your hand.

An alternating current (AC) power supply can either be single-phase or three-phase: 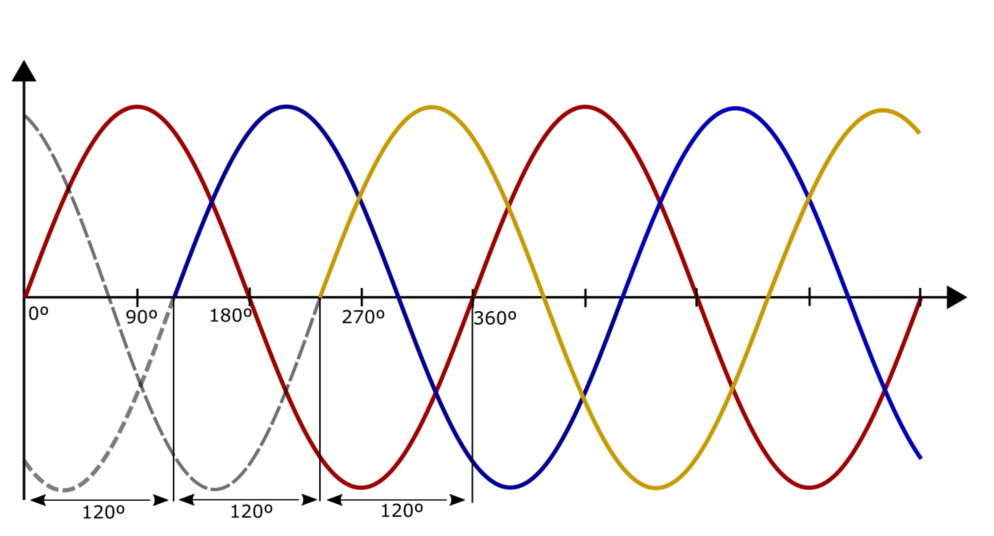 The main difference between these two configurations is the ability to add a neutral wire (see Figure 5).

The voltage at which the power grid delivers single-phase electric power to its users has various values, depending on the geographical location. That is why it is very important to check a power supply’s input voltage range before buying or using it, to ensure that it is designed to work in your country’s power grid. Otherwise, you could damage the power supply or the device connected to it.

Table 2 compares the grid voltages in different areas around the world.

*Japan has two frequencies in its national grid because of the origins of its electrification in the late 19th century. In the western city of Osaka, electricity suppliers bought 60Hz generators from the United States, while in Tokyo, which is in the east of Japan, they bought 50Hz German generators. Both sides refused to change their frequency, and to this day Japan still has two frequencies: 50Hz in the east, 60Hz in the west.

As mentioned before, three-phase power is not only used for transportation, but is also used to power large loads, such as electric motors or charging large batteries. This is because the parallel application of power in three-phase systems can transfer much more energy to a load, and can do so more evenly, due to the overlapping of the three phases (see Figure 6).

For example, when charging an electric vehicle (EV), the amount of power you can transfer to the battery determines how fast it charges.

Single-phase chargers are plugged into the alternating current (AC) mains and converted to direct current (DC) by the car’s internal AC/DC power converter (also called an on-board charger). These chargers, are limited in power by the grid and the AC socket.

The limitation varies from country to country, but is typically less than 7kW for a 32A socket (in EU, 220 x 32A = 7kW). On the other hand, three-phase power supplies convert the power from AC to DC externally, and can transfer over 120kW to the battery, enabling super-fast charging.

AC/DC power supplies are everywhere. The main job of an AC/DC power supply is to transform the alternating current (AC) into a stable direct current (DC) voltage, which can then be used to power different electrical devices.

Alternating current is used to transport electric power all across the electric grid, from generators to end users. An alternating current (AC) circuit can be configured as a single-phase or a three-phase system. Single-phase systems are simpler, and can deliver enough power to supply an entire house, but three-phase systems can deliver much more power in a more stable way, which is why they are frequently used to supply power for industrial applications.

Designing an efficient AC/DC power supply is no easy task, as current markets demand high-power, extremely efficient, minuscule power supplies that are capable of maintaining efficiency over a wide range of loads.

Questions answered by MPS engineers in 24h
MP174A Input Voltage Range
Hello, We have been meaning to design a DC-DC converter that supports 35-100VDC input with 0.25A output at 15VDC. We came across MP173A and MP174A. Ac...
AC-DC POWER CONVERTERS