The 5G telecom standard is intended to support the ever-increasing data volume requirements from smartphones and smart connected devices in markets such as home and industrial automation, autonomous vehicles, healthcare, and smart wearables. 5G enables many more data connections per base station by using what are called “massive multiple-input multiple-output” (massive-MIMO) antenna arrays.

Existing 4G base stations can use up to four transmitter and four receiver elements per array (4x4 MIMO). In contrast, 5G is expected to use up to 64 transmitter and 64 receiver massive-MIMO arrays. In addition to having more channels per base station node, 5G can support data rates up to one hundred times greater than 4G networks with very low latencies of about 1ms.

All of this means that more modems, data converters, and high-speed baseband digital processing will be required per base station, which inevitably means more power. Estimates indicate that 5G base stations may need up to three times more power than existing 4G designs. Hardware designers are faced with the challenge of finding power solutions that enable all of this additional processing and electronics to be squeezed into form factors similar to those of existing 4G base station enclosures. Increased board component density demands space-saving solutions with higher efficiency and lower EMI than traditional discrete DC/DC IC and external inductor based solutions.

Base stations typically use a 48V input supply that is stepped down by DC/DC converters to 24V or 12V, then further stepped down to the many subrails ranging from 3.3V to less than 1V to power ASICs in the baseband processing stages.

With so many power rails to generate, the use of traditional discrete step-down DC/DC converters with a control IC and internal or external power MOSFETs — plus external inductors and capacitors — creates a complex and time-consuming task. The correct inductor sizing and construction, amount of input capacitance, input filtering, and output capacitance must be considered for each converter. Additional factors, such as frequency of operation and sequencing capabilities, must also be taken into account.

Careful component layout and placement of filter components are necessary to minimize conducted and radiated EMI caused by switching currents in the converter and inductor circuit. DC/DC converters typically generate conducted EMI via magnetic fields from the current loop path, formed between the output power MOSFET switching node to ground, and the input capacitor to ground. They also generate radiated electric field EMI from the MOSFET switching node to the inductor connection, which has a high dV/dt since it is switching from the high input voltage level to ground continuously, and from the electromagnetic fields generated in the inductor itself (see Figure 1).

Failure to get the design right can result in expensive design iterations and EMI lab retests.

An alternative approach to simplify design and speed time-to-market is to utilize self-contained DC/DC converter modules for each power rail. Advances in semiconductor process technology and package construction mean that the latest generations of DC/DC modules achieve very high power density, high efficiency, and good EMI performance in a small form factor. New construction techniques, such as in-package flip-chip and “mesh-connect” lead frame technology mean that the IC, inductor, and passives can be mounted directly onto the lead frame without wire bonding or an additional internal PCB (see Figure 2).

This new form of construction utilizing the lead frame for interconnections has a number of advantages: EMI is better controlled, heat dissipation is improved, and footprint size is reduced.

Compared to older construction styles that use an internal PCB substrate or wire bonding, connection trace lengths can be minimized and direct connection to passive components keep the inductance low to minimize EMI. The use of a land grid array (LGA) package format that surface-mounts directly to the target PCB offers a lower EMI profile than alternative SIP/SIL style converters with leads that can radiate EMI. The LGA package allows a solid ground plane to cover most of the area beneath the module, which helps close eddy current loops and further reduce EMI (see Figure 3). For some module types, a metal can cover adds additional attenuation of radiated EMI.

Thermal conduction from the MOSFET power stage is improved by direct copper pillar connection from the MOSFET die source and drain to the module’s lead frame, and to the target PCB copper below. This allows for a smaller module size than older constructions, in which bond wires or an internal circuit board presented a thermal isolation barrier to heat dissipation.

The MPM3550E from Monolithic Power Systems (MPS) highlights the space savings with an integrated module approach. This module accepts up to 36V input with 5A rated output current over an adjustable range of 12V to 1V. The package dimensions are 12mmx12mmx4.2mm in an LGA form factor.

Compared to a conventional 36V, 3.5A discrete DC/DC layout with an external inductor and passives, the footprint of the MPM3550E offers a space savings of approximately 30% (see Figure 4).

In addition to the space-saving gains, the designer no longer has the task of individual component selection or converter layout. These issues have already been considered by the manufacturer in the internal construction of the module. The use of enclosed magnetic path inductors with a soft-saturation core, optimized current loop paths, and integrated input filtering simplify the task of ensuring the final design meets radiated and conducted EMI regulations.

A simple LC low-pass filter consisting of two 10μF capacitors and a 3.3μH inductor is sufficient to meet conducted emission specifications, including CISPR22 Class B and CISPR25 Class 5 (see Figure 5).

For further circuit board space savings, it is possible to extend the approach by combining multiple DC/DC converters into one module. This is particularly suited to lower voltage circuits, such as ASICs. The lower overall power level allows multiple converters to be integrated into a module while still achieving manageable power density and dissipation levels (see Figure 6 and Figure 7). 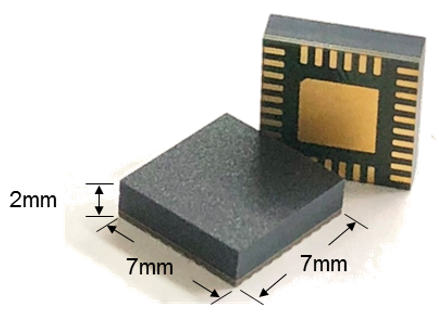 The board space-saving achieved by a multi-rail module approach can be as high as 90% compared to the use of individual DC/DC converters with external inductors and passives. For example, Figure 8 shows the MPM54304 module from MPS, which integrates four step-down buck converters in a single 7mmx7mmx2mm module, including inductors and passives, compared with the area taken up by four discrete step-down converters.

It is a certainty that 5G will demand higher levels of electronic integration and power density in baseband and radio board design while also being constrained by the limits of the installation’s cabinet size and the loading capabilities of radio masts. The use of integrated DC/DC modules can assist in board space area savings, as well as offering benefits that include simpler layout and reduced EMI. Together, these factors combine to reduce risk and provide faster time-to-market.