Figure 1 shows eight subdivisions in microstepping. The 90° electrical angle for single-phase stepping is divided into eight equal parts, representing eight current positions. The current at each position is a vector synthesized by the current of the phase A winding and phase B winding. The amplitude of the resulting vectors is always 1. 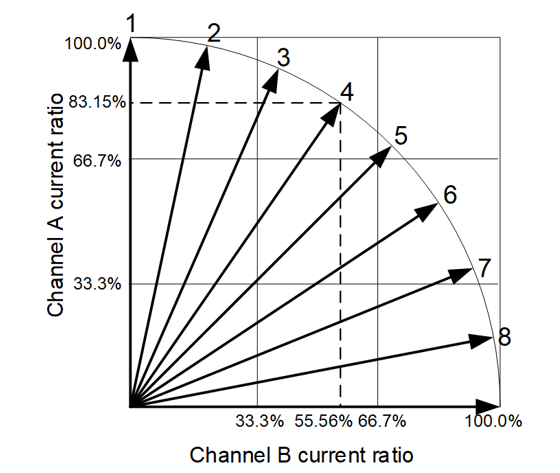 The current at each position must be projected onto phase A and phase B, respectively, to obtain the control value (see Table 1).

Under the control of eight subdivisions (or steps), the current of the bipolar stepper motor resembles a sine wave (see Figure 2). If there are more steps, the current through the bipolar stepper motor windings resembles a standard sinusoidal wave. The sinusoidal current waveform reduces motor output torque fluctuations and forms a circular rotating magnetic field in space, which improves the stepping motor’s rotational stability.

Figure 2: Phase A and Phase B Current Waveform under Eight-Step Microstepping

Slow decay and fast decay are the typical control methods used to stabilize the current at each step. Consider a singular step on phase A. Figure 3 shows phase A’s current regulation waveform, which is achieved by controlling the on/off function of the four MOSFETs driven by phase A’s full-bridge drive.

The two decay modes will be discussed in further detail below. 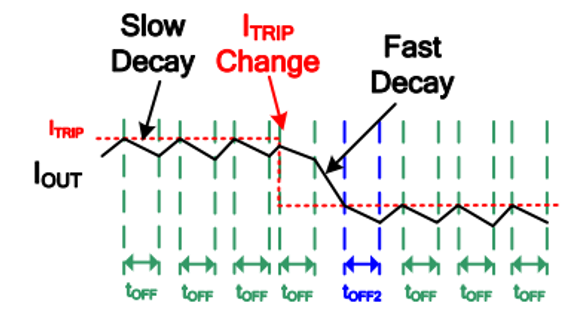 When Q1 and Q4 turn on, the supply voltage (U) is applied to phase A’s winding, and the current starts to rise. In the corresponding equivalent circuit, R is the winding resistance and L is the inductance (which have equivalent impedances), and E is the back EMF generated in the winding by the rotor’s moving magnetic field (see Figure 4). The reverse electromotive force acts on the winding circuit.

Once the current value reaches the desired value, the current must be reduced. Otherwise, the current may continue to increase and exceed its set value. In this scenario, slow decay is required. 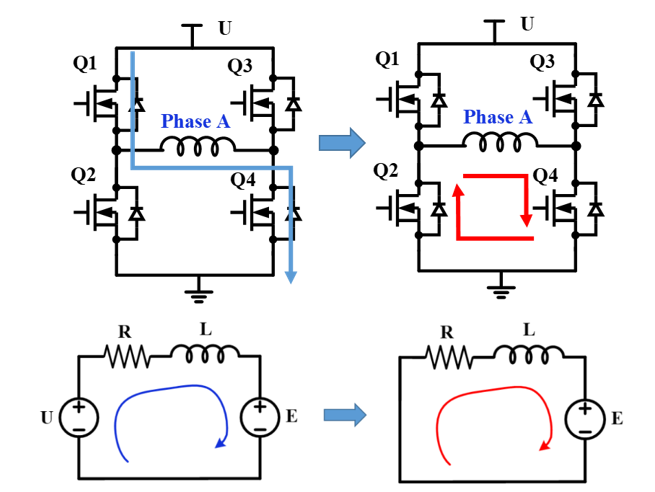 To enter slow decay, turn off Q1 and turn on Q2 (ignoring the dead time). This is equivalent to short-circuiting the phase A winding. Due to the current through the winding inductance, the current direction does not abruptly change, and the current forms a circulating current in the two lower MOSFETs. Only the back electromotive force (E) acts on the circuit, and the current is subject to a reverse voltage drop (-E) and starts to drop. If the voltage drop caused by the resistance is disregarded, the current decreases at the speed of (E / L).

When the current is about to enter a step that requires lower current, the current must drop further. If the current does not decrease fast enough, the slow decay speed may not be fast enough to reduce the current to the desired level. In this situation, fast decay is required (See Figure 5). 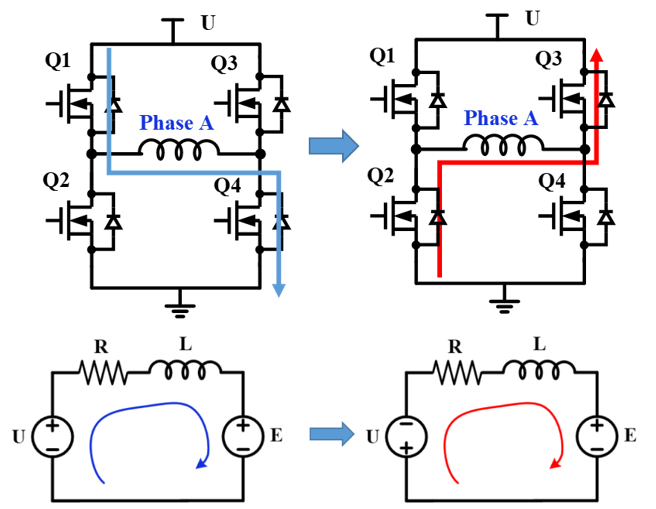 During fast decay, Q2 and Q3 turn on after Q1 and Q4 turn off (ignoring the dead time). At this time, the supply voltage is applied in reverse to the phase A winding and in series with the back EMF (E). The current flows from Q2 to Q3 because the current through the winding inductance cannot change suddenly. The current decreases at the speed of ((E + U) / L), so the current drops faster than slow decay.

Comparison of the Different Current Controls

During slow decay, the current decreases over a longer period of time while dropping to the next step, but this results in a distorted waveform.

Microstepping allows for finer positioning and smoother operation compared to full-step or half-step mode. This article discussed how slow decay and fast decay between steps can be used to stabilize the current. In addition, combining these decay modes can decrease torque ripple, which reduces vibration and noise.